Robert Wiene's pioneering masterpiece of German expressionism tells the tale of a terrifying somnambulist and his master, the bizarre Dr. Caligari. A true classic of the silent cinema. 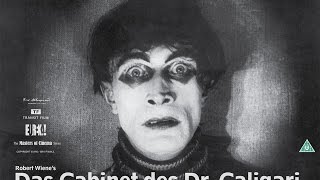 "See the sleepwalker, floating down the street, ripped from some nightmare! A street of misshapen houses with brooding windows, streaked by dagger strokes of light and darkened by blots of shadow! You will immediately feel the terror in the movements of that floating grotesque!"
- from the American advertising campaign for "Caligari".

This silent masterpiece has been called the first "cult" movie and the first horror film of genuine quality and substance. A young student, Francis, (Freidrich Feher) encounters evil magician, Dr. Caligari (Werner Kraus), at a county fair. Caligari's "act" consists of waking a frightening somnambulist, Cesare, from the coffin where, it is claimed, he has lain asleep for years. When Francis' best friend is murdered and a killing spree erupts in the small village, he suspects that Caligari is using Cesare to commit the ghastly crimes. When Cesare is sent to murder the student's fiance, Joan (Lil Dagover), he is so smitten with her beauty that he abducts her instead. Francis tracks Caligari to a nearby insane asylum where he is horrified to learn that the doctor is not an inmate but the director of the institution! The surprise ending is as shocking and perplexing today as it was when originally released.

Set designer Hermann Warm enlisted Walter Reimann and Walter Roehrig, fellow members of Berlin's expressionist Der Sturm group, to act as art directors. They created the unprecedented look of the sets, costumes and makeup to reflect the mind of a madman. The Cabinet Of Dr. Caligari demonstrated to all future filmakers that psychological horror could equal or exceed the effects of physical shocks. This thought-provoking film is a must-see for all who appreciate great movies.

In this silent, classic example of early German expressionism, this cinematic landmark relates the stylized tale of a Dr. Caligari, a fairground showman who hypnotizes an innocent villager--turning him into a sleepwalking "zombie"--and compels him to carry out fiendish murders. Inarguably a landmark in world cinema, Robert Weine's one-of-a-kind thriller features fantastical, heavily stylized sets, antirealist acting, and evocative subjective camerawork.

Customer Rating:
Based on 88902 ratings.


Considered to be the first real horror movioe, The Cabinet of Dr Caligari is more than that. Filmed in an expressionalist set in unique camera angels, backgrounds, costumes. and lightning, the film makes you question who is mad and what is madness? Who are the true occupants of the asylum? You? Me? Are we all mad?


I saw this for the 1st time about 30 years ago and I guess I'd forgotten how scarey it is. Yes, it's a horror film, but with a twist: what happened, it is real, what is real, who - including you and I - are mad in this world? Ages ahead of its time!


I had often read about "The Cabinet of Dr. Caligary" in the many film books I enjoyed at my local library so I was very excited when it was released on DVD. It was a long wait but one well worth it. This is a true classic and should be required viewing for all film students.

I was particularly impressed with the distorted sets and scenery. Conrad Veidt's performance was outstanding as the sleepwalker that stalks the German village by night. But this is not to be dismissed as just another horror film. It is so much more than that- the viewer sees the world through the eyes of a psychotic and you will find yourself asking "is it real? Did that really happen?"

This film would influence generations of film makers to come and is well worth adding to a classic film library.


This is a great excursion into German Expressionism when the media was just beginning. Great story, somewhat outdated since this plot has been done before -- but this was the first to tell the story through the eyes of a lunatic! Every collector should have this gem!


Long befofe Tim Burton was born, Robert Wiene directed one of the most visually creepy films of all time. The sets in this film are amazing, and the makeup and costumes are equally as creepy. This is a must have for anybody who considers themselves a horror film buff. It's the first horror film ever.