No wonder they're happy. They just stole a half-million dollars in front of a hundred-thousand witnesses... But watch what happens when it's time for The Split! 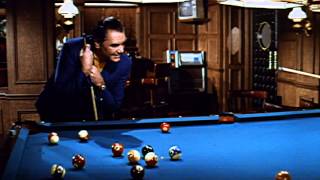 The L.A. Coliseum is the target of a crew of daring thieves led by the implacable McClain in this neo-noir adaptation of Richard Stark's The Seventh. Jim Brown (as McClain) heads the all-star cast as the criminals and cops that inhabit the world of The Split. While McClain's meticulously planned heist goes as planned, the crew start to fall out after a psycho landlord and a crooked cop decide to stake a claim to the loot. Strikingly shot by Burnett Guffey (Bonnie and Clyde), The Split ups the ante with its iconic locations, splendid Sixties fashions and full-on funky score by Quincy Jones with contributions from Sheb Wooley, Arthur Prysock and Billy Preston. As a footnote for the faint of heart, The Split was the first movie to earn an "R" rating.

A pair of crooks conspire to rob the ticket booth at the Los Angeles Coliseum during a Rams game. Before they can perform the heist, the two must find precisely the right henchmen to join them. Each potential gang member must undergo a rigorous test of skill. Thanks to care and precise planning, the caper comes off smoothly and afterward the gang leader (Jim Brown) hides the money in the apartment of his ex-wife (Diahann Carroll). She only agrees to keep the money on the provision that he reform so they can get back together. Unfortunately, the wife's lust-crazed landlord (James Whitmore) busts into her house the next day and tries to rape her. During the struggle he kills her and then takes the loot. Later a crooked cop (Gene Hackman) investigates. Meanwhile, when the gang members learn that the loot is missing, they suspect a double-cross and engage in a huge battle. The cop finds the money and at first keeps it for himself. The head crook eventually figures out that the cop has it and so goes to him to make a little deal.

Romance | Crime | Gangsters | Romances | Love | Criminals
This product is made-on-demand by the manufacturer using DVD-R recordable media. Almost all DVD players can play DVD-Rs (except for some older models made before 2000) - please consult your owner's manual for formats compatible with your player. These DVD-Rs may not play on all computers or DVD player/recorders. To address this, the manufacturer recommends viewing this product on a DVD player that does not have recording capability.