The Hunchback of Notre Dame (Silent)

This silent classic is the first feature version of the Victor Hugo epic. Lon Chaney's performance and incredible make-up vividly bring this picture to life 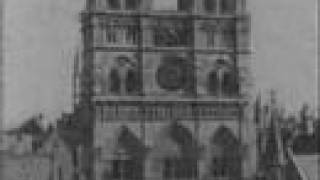 Lon Chaney, cinema's "Man of a Thousand Faces," stars in this silent classic - the first version of Victor Hugo's novel about the tortured hunchback. Half-blind and monstrously deformed, Quasimodo dwells within the sanctuary of the Notre Dame Cathedral in Paris. Ridiculed and exploited by a cruel world, he passionately rings the cathedral's great bells to express his feelings. Quasimodo secretly loves a beautiful gypsy girl named Esmeralda, for whom he sacrifices his life when he rescues her from her evil guardian. Chaney's great performance and his incredible use of make-up brilliantly evoke both terror and pity for the hunchback as this classic tale is played out in medieval Paris.

This silent film is the first screen version of Victor Hugo's 1831 novel. Chaney plays the deformed bell-ringer who is smitten by a beautiful dancing girl persecuted by the wicked Bishop of Notre Dame.

A disfigured outcast from society, Quasimodo shows his humanity by rescuing a fair maiden marked for death. In the star-making gothic classic, the noble hunchback gives his life for the love of a young woman.

19%off
The Hunchback of Notre Dame
$12.10 Super Savings
Add to Cart

The Cabinet of Dr. Caligari
$20.30 Super Savings
Add to Cart

Customer Rating:
Based on 8336 ratings.


Closer to Hugo's novel than the 1939(more critically acclaimed)version and in ways as close as the 1957 version,this version remains one of the truly great silent masterpieces. Still totally watchable and absorbing tale of terror,revenge and passion set in Paris's Notre
Dame Cathedral. Unquestionably one of Chaney's finest films!