Angel On My Shoulder

An Academy Award winning cast stars in this devilish comedy/fantasy about a gangster who returns from the dead. 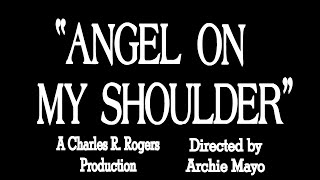 ANGEL ON MY SHOULDER (1946) Faux trailer

Muni portrays Eddie Kagle, a recently murdered gangster whose attempts at "busting out" of hell and returning to the world of the living bring him to the attention of Nick (Claude Rains) - the Devil himself. Eddie makes a deal with Nick: the devil will send him back to earth to take over the body of a respected judge who is trying to stamp out evil. If, as the judge, Eddie can become more dishonest and help keep more of those doing the devil's work roaming the earth, Nick will set him free for good. But Eddie soon discovers that he can't return to his corrupt ways, and when he falls in love with the judge's fiance (Anne Baxter), he tries to break his deal with the devil.

Angel On My Shoulder was written by Harry Segall, who was the co-writer of another return-from-the-dead fantasy, Here Comes Mr. Jordan, a film in which Claude Rains appeared as an angel, not the devil.

Harry Segal, the writer of HERE COMES MR. JORDAN, sends a soul in the other direction in ANGEL ON MY SHOULDER. Gangster Eddie Kagel (Paul Muni) is killed by a buddy and lands in hell. After an unsuccessful attempt to break out of hell, Nick, the Devil, (Claude Rains) strikes a deal with Eddie. Nick will allow Eddie back to Earth if Eddie will destroy the reputation of upstanding judge Frederick Parker. Eddie agrees to the deal and Nick zaps his soul into Frederick's body. Eddie/Frederick's aim is to off his turncoat buddy as soon as possible, but Nick isn't interested in any funny business. As Eddie and Nick attempt to ruin Frederick, Parker's fiancée (Anne Baxter) is rearing up to wed Eddie/Frederick, and her affections cause Eddy to reflect upon his devilish mission. ANGEL ON MY SHOULDER, director Archie Mayo's final film, which was released in 1946, has retained its popularity over the years.

A dead gangster makes a pact with the devil so he can come back to earth and exact revenge on his murderer.

Adventure | Afterlife | Organized Crime | Theatrical Release | Crime | Essential Cinema
This product is made-on-demand by the manufacturer using DVD-R recordable media. Almost all DVD players can play DVD-Rs (except for some older models made before 2000) - please consult your owner's manual for formats compatible with your player. These DVD-Rs may not play on all computers or DVD player/recorders. To address this, the manufacturer recommends viewing this product on a DVD player that does not have recording capability.

Customer Rating:
Based on 3950 ratings.


An enjoyable twist on the "given a second chance to live" theme. Muni's accent makes for some unintelligible dialog from time to time (Maybe they should have cast Brian Donlevy in the role) and the Muni/Baxter love thing is a bit much to believe (from my persepctive, anyway). Anne Baxter is lovely, Claude Raines plays it straight and Muni mugs. Not a bad film, but better casting in the lead role would have made a great fim.