176K ratings
Currently Out of Stock: We'll get more as soon as possible
Notify Me When Available
Add to Wishlist
Format:  Blu-ray
sku:  FYDQ
91% recommend us! 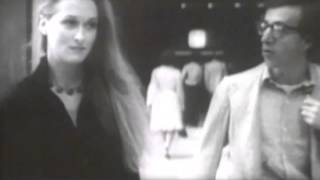 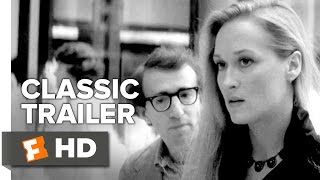 "Years ago I wrote a short story about my mother called 'The Castrating Zionist' and I want to expand it into a novel."
- Isaac Davis (Woody Allen) to Mary (Diane Keaton)
"The brain is the most overrated organ."
- Isaac to Mary
"I was just thinking, there must be something wrong with me because I've never had a relationship with a woman that's lasted longer than the one between Hitler and Eva Braun."
- Isaac to Mary
"That book makes me out to be like Lee Harvey Oswald."
- Isaac to Jill (Meryl Streep)
"I can't express anger. That's one of the problems I have. I grow a tumor instead."
- Isaac to Mary
"What does your analyst say' Did you speak to him'"--Isaac to Mary
"Donny's in a coma. He had a very bad acid experience."
- Mary's reply to Isaac
"You think you're God."--Yale (Michael Murphy) to Isaac
"I gotta model myself after someone."
- Isaac's reply to Yale
"You're God's answer to Job."
- Isaac to Tracy (Mariel Hemingway) during their horse-drawn carriage ride through Central Park

Sight and Sound - 09/01/1979
"...Luminous camerawork....The film is intricately patterned with street dolly shots, high angles and static medium shots..."
Variety - 04/25/1979
"...Woody Allen never seems to tire of topping himself....An irresistible yarn of personal relationships that draws skillfully on the best comic moments of ANNIE HALL and the raw emotions he portrayed in his last picture INTERIORS..."
Chicago Sun-Times - 03/18/2001
"...A breathtaking hymn to the idea of being in love in Manhattan....This is one of the best-photographed movies ever made..."
Total Film - 09/01/2000
"Defining, dry Woody Allen paean to New York City..."
Uncut - 12/01/2004
"[P]iquant, perceptive and plain funny..."
Premiere - 07/01/2006
"The Gershwin-laden soundtrack is sumptuous and the black-and-white cinematography by Gordon Willis is dazzling..."
The Guardian - 05/11/2017
"Hemingway’s performance has a dignity and maturity, especially in her hurt feelings when Isaac breaks up with her. She has an honesty and authenticity that the rest of the cast, for all their comic brilliance, do not."

Woody Allen finished his first decade of filmmaking, the 1970s, with one of his greatest and most deliberately artistic films, the love song to his home city MANHATTAN. Allen plays Isaac Davis, another one of his thinly veiled self-portraits, who finds himself suffering from a mid-life crisis. Unhappy in his career as a variety show comedy writer and newly divorced from a woman who has since come out as a lesbian, Isaac waffles between two relationships: that with emotionally honest and open, but far too young, Tracy (Mariel Hemingway in an Academy Award nominated performance) and with pseudo-intellectual, neurotic Mary (Diane Keaton). Allen uses these two women to contrast the naiveté and lack of pretension of youth with the growing cynicism of middle age.

Although the acting and writing is some of the sharpest of Allen's filmmaking career, what is truly memorable and endearing about MANHATTAN is its romantic view of New York. Whereas the character relationships in the film are largely dysfunctional and fueled by a vision of perfection, by contrast the city itself is envisioned by Allen as an object of perfection. In order to create aesthetically pleasing images of the city, Allen and his longtime cinematographer Gordon Willis decided to shoot the film in black and white and in the 2.35:1 widescreen ratio, the first time that Allen had used either format. The images are backed by the songs of quintessential New York composer George Gershwin, setting a tone of romanticism and grandeur that underlies Isaac's (and Allen's) inherent dissatisfaction with the mundane aspects of his life. The magnificence of the city of New York is the backdrop to the search for a similar splendor in human relationships in MANHATTAN.

Woody Allen's celebration of the city that has always been a central character in his films: New York. Here he presents a tale of the sometimes convoluted romantic relationships of a group of neurotic Manhattanites, centered around television writer Isaac Davis, and including his lesbian ex-wife, his guilt-torn philandering friend, and his friend's pseudo-intellectual journalist girlfriend. Although Davis is already involved with a beautiful, intelligent 17-year-old, he finds himself attracted to the mistress of his married best friend--the journalist--who embodies every quality he thought he didn't like, but somehow seems appealing this time around. One of Allen's most mature works, with perhaps deeper characters and more fundamental sentiment than in his earlier comedies. Willis's black-and-white photography and a lush Gershwin-filled soundtrack put the finishing touches on this paean to the titular borough.

Hannah and Her Sisters
99¢ on Sale
Add to Cart

Hannah and Her Sisters
$12.50 Super Savings
Add to Cart

Hannah and Her Sisters (Blu-ray)
$18.10 Super Savings
Add to Cart