Robert Montgomery and George Sanders team-up to play against type in this probing psychological thriller that features Ingrid Bergman as the object of their obsessions. 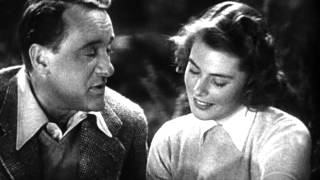 Robert Montgomery plays British steel mill owner Philip Monrell, whose outward charm and flippancy conceal a terrible secret, while George Sanders plays Ward Andrews, the best friend Philip hides behind. But when Philip marries Stella Bergen (Ingrid Bergman), he becomes obsessed with the belief that Ward is trying to steal Stella away from him. An obsession that soon turns to twisted, murderous intent...

A RAGE IN HEAVEN was based on a novel by James Hilton, who thanks to LOST HORIZON and GOODBYE MR. CHIPS was a "hot property" in 1941. Going through many of the same paces he'd trod in NIGHT MUST FALL, Robert Montgomery stars as British steel mill owner Philip Monrell, whose outward charm and insouciance disguises the fact that he suffers from hereditary insanity. Throughout his life, Monrell has successfully sidestepped responsibility by hiding behind the accomplishments of his best friend, Ward Andrews (George Sanders). When he marries Stella Bergen (Ingrid Bergman), his mother's pretty travelling companion, the neurotic Monrell becomes obsessed with the belief that Andrews is trying to steal Stella away from him-and thanks to his paranoia, Andrews and Stella do indeed fall in love. Unsuccessful in his efforts to murder Andrews, Monrell decides to exact a bizarre revenge by committing suicide and planting enough clues so that Andrews will be charged with his murder! Though absent from the final half-hour of A RAGE IN HEAVEN, Robert Montgomery continues to dominate the proceedings; indeed, for a while it looks as though he will "win" in the end after all. Making her third Hollywood film appearance, Ingrid Bergman felt that the role of Stella Bergen was inadequately suited to her and did her best to drop out of the picture; reportedly, she was mollified when MGM promised to let her play against type as the "bad" girl in DR. JEKYLL AND MR. HYDE.

Psychodrama | Murder | Marriage | Mental Illness | Great Britain
This product is made-on-demand by the manufacturer using DVD-R recordable media. Almost all DVD players can play DVD-Rs (except for some older models made before 2000) - please consult your owner's manual for formats compatible with your player. These DVD-Rs may not play on all computers or DVD player/recorders. To address this, the manufacturer recommends viewing this product on a DVD player that does not have recording capability.