Dramatic true story of an American writer (Claudette Colbert) who is thrown into a Japanese concentration camp during WWII and attempts a daring escape. 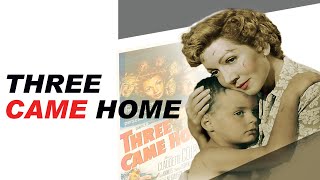 Claudette Colbert stars in this harrowing war drama based on the autobiography of American author Agnes Newton Keith. Trapped on Borneo when the Japanese invade the island during World War II, Mrs. Keith and her husband, a British administrator (Patric Knowles), are sent to separate prison camps with other American and British subjects. Mrs. Keith's camp is overseen by Colonel Suga (Sessue Hayakawa), who takes an avid interest in the American authoress. Despite his humanitarian views, he is helpless to intervene when she is subjected to torture, starvation, and humiliation at the hands of the guards. Told in agonizing detail, Three Came Home is an unforgettable film that portrays the ultimate triumph of the human spirit in the face of seemingly insurmountable odds.

During World War II, American author Agnes Newton Keith and her British husband were arrested and imprisoned in a Japanese prisoner camp. The account of their experiences is chilling and intense.

Prison / Prisoners | True Story | World War II | Theatrical Release
This product is made-on-demand by the manufacturer using DVD-R recordable media. Almost all DVD players can play DVD-Rs (except for some older models made before 2000) - please consult your owner's manual for formats compatible with your player. These DVD-Rs may not play on all computers or DVD player/recorders. To address this, the manufacturer recommends viewing this product on a DVD player that does not have recording capability.

Customer Rating:
Based on 2755 ratings.


Three Came Home is something of a forgotten film. It rarely gets mentioned when WWII films are discussed, but it should be. While not as graphic or detailed as Schindler's List, and while the story isn't nearly as tragic, Three Came Home was still very much the precursor to that film in style and tone. With a similar theme, and an intelligent script, this is a film ahead of it's time and deserves to be watched for generations to come. The writing, acting, and direction are all top notch, and the quality of the film may be a pleasant surprise to many. What's just as nice is the print that Alpha used. The print is as clean and clear as any that I've seen on a "public domain" DVD. In fact, this print rivals some films of that era released on DVD by major studios. If you like WWII movies, or if you like good drama, buy Three Came Home. You will be glad that you did. (I sure am.)


I don't like WAR movies - but this one is FANTASTIC! Not a lot of "war" scenes. I put the movie in - thinking I don't like war stuff - but you know - this kept me so entertained! I could not leave the t.v. until it was over! Claudette Colbert is just wonderful as the star in this movie - you truly felt her pain and anguish as she was in the prison camp with her small son. I HIGHLY recommend this movie. I just loaned my copy to my mother - and I handed her a catalog from Oldies too! She'll have to order her own copy! I want mine back!


I've seen many a war movie on VHS/DVD, but "Three Came Home" is the best for being made back in the 40's. Claudette Colbert did a great job acting in the picture. There was not many scenes showing battle secenes, but what there was in the picture was enough to make it look authentic. I'd recommend this movie highly.