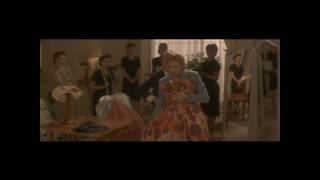 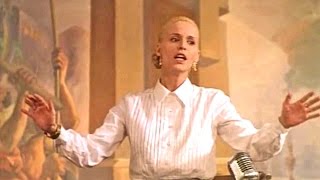 Entertainment Weekly - 11/29/96, pp.86-88
"...This reinvigoration returns the musical closer to its origins as a satirical romp, a snide, silly spoof of fame that just happened to have some lovely moments, too. For all of Madonna's solemnity, this is the first time in 20 years that EVITA has been--dare we say it?--fun..." - Rating: A-
New York Times (Publisher) - 11/21/96, p.C16
"...[Madonna's] Eva Peron puts her voice in a class with Patti LuPone and Elaine Page....[she] radiates on 'Another Suitcase In Another Hall' and gracefully looks back for a contemporary pop ballad on 'You Must Love Me'....Antonio Banderas fares just as unexpectedly well..."

Principal cast includes: Madonna, Antonio Banderas, Jonathan Pryce, Jimmy Nail.
Producers: Nigel Wright, Alan Parker, Andrew Lloyd Webber, David Caddick.
Recorded at CTS Studios, Whitfield Street Studios, Metropolis Studios, EMI Abbey Road Studios and Olympic Recording Studios, London, England.
Middle-class girl, can act a bit, moves to the big city, climbs up the ladder and over a few men, sets her sights on nothing less than worldwide fame, does anything and everything to make that happen, and makes sure everyone in her life works toward the same goal. EVITA is, of course, the autobiography of Madonna. Or, at the very least, the story of Argentina's controversial populist hero Eva Peron is the role of Madonna's life. Say what you want about how well she acts it, but this lush pop-rock soundtrack is hard digital proof that she was born to sing it. Completely giving herself over to the role--the one thing her critics doubted she could ever do--Madonna turns in a vocal performance that may well surpass that on any of her own records.
Madonna also, not surprisingly, dominates this soundtrack. She sings some parts, including the sad ballad "Another Suitcase In Another Hall," that weren't written for the role of Eva Peron; and Tim Rice and Andrew Lloyd Webber, who won a slew of Tony Awards for the 1979 Broadway version of "Evita," have given her a new ballad, "You Must Love Me," that works equally well as an anthem for either Madonna or Peron. Actor Antonio Banderas, following up his small singing role in the movie "Desperado," proves a more-than-capable Che Guevara.
Principal cast includes: Madonna, Antonio Banderas, Jonathan Price, Jimmy Nail.
Producers: Nigel Wright, Alan Parker, Andrew Lloyd Webber, David Caddick.
Engineers: Dick Lewzey, David Reitzas, Robin Sellars, Mark "Spike" Stent.
Recorded at CTS Studios, Whitfield Street Studios, Metropolis Studios, EMI Abbey Road Studios, Olympic Recording Studios, London, England.
Personnel: Jimmy Nail, Madonna, Antonio Banderas, Jonathan Pryce (vocals); Angeline Ball, Alex Sharpe, Lorenza Johnson, George Little, Fredrick Warder, Julia Worsley, Andrew Wood-Mitchell, Gordon Neville, Julian Littman, Laura Pallas, Linda Taylor, Mark Ryan, Nick Holder (background vocals).
Audio Mixers: Dave Reitzas; Madonna; Nigel Wright.
Recording information: CTS Studios, London, England; EMI Abbey Road Studios, London, England; metropolis Studios, London, England; Olympic Studios, London, England; Whitfield Street Recording Studios, London, England.
Photographer: David Appleby.
Unknown Contributor Roles: Courtney Pine; Fridrik Karlsson; Gary Moore ; Peter Adams; Keith Fairbairn; Steve Pearce; Paul Keogh; Ralph Salmins.
Madonna staked much of her career on Evita, gambling that it would establish her as a proper movie star and respected actress, as well as reviving her slumping musical career. Both the film and the soundtrack, while worthy efforts, fall just short of their goals, despite their numerous strong points. The double-disc soundtrack to Evita -- which essentially is an audio document of the entire film, since there is no dialogue in the movie -- is an exquisitely produced and expertly rendered version of Andrew Lloyd Webber and Tim Rice's rock-inspired musical, yet it remains curiously unengaging. Part of the reason is Madonna's performance. While she gives a startlingly accomplished and nuanced performance -- her voice actually sounds like it matures over the course of the album -- it is impossible to listen to her without getting the impression that she is trying really hard to be credible, which makes it difficult to connect with her. It doesn't help that her supporting cast of Jonathan Pryce and Antonio Banderas are only fitfully successful; Banderas' performance, in particular, suffers from being removed from the visuals. Even with the faults, Evita has its merits, including the written-for-film ballad "You Must Love Me," and is worth investigating. It just isn't the definitive work that it wishes to be. ~ Stephen Thomas Erlewine

Madonna
Something To Remember
$13.40 CD Sale
Add to Cart