She is both temptation and salvation. 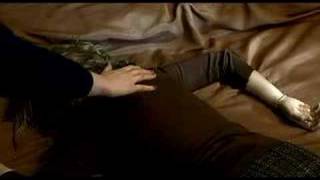 The Holy Girl poignantly captures the lives of two teenage girls, Amalia, daughter to the owner of the hotel, and the girl's best friend Josefina, as they adjust to their growing sexuality and religious passion. After an encounter with the respected Dr. Jano, a physician attending the convention, Amalia confides in Josefina that she is going to deliver him from sin. After submitting to her wishes, Dr. Jano realizes that no matter how good the temptation, nothing is worth the evil it causes.

Lucrecia Martel (LA CIENAGA) returns with THE HOLY GIRL, a powerfully understated coming-of-age tale in which a teenage girl grows up in a religiously fervent society. The film takes place during a medical convention in an Argentinean hotel, where its characters stumble upon each other. Amalia (Maria Alche) is a pretty, conflicted teenager who has become consumed with the religious concept of "vocation," which she has been learning in Catholic school. She lives with her divorced mother, Helena (Mercedes Moran), who works at the hotel, and spends most of her time with her mischievous friend Josefina (Julieta Zylberberg). But when a seemingly random stranger rubs up against her in a crowd, she begins to think that she has found her calling. It turns out that the stranger is an influential doctor, Jano (Carlos Belloso), with whom Helena has coincidentally begun to fall in love. The more that Amalia considers this chance encounter, the more determined she is to pursue it.

As if adolescence weren't difficult enough, growing up submerged in a deeply religious Latin American culture makes it all the more challenging. Featuring impressively reserved performances across the board, Martel's film bravely shies away from overly dramatic confrontations. It's the unspoken messages that matter the most in the audacious and deeply luminous THE HOLY GIRL.