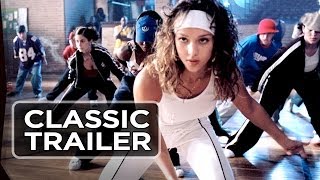 With a plethora of flashy cameos by artists Missy Elliot, Tweet, Ginuwine, Jadakiss, and Sheek, HONEY feels like an extended hip-hop video with an inspiring, socially conscious message about ambition and the bittersweet taste of success.

New York City dancer-choreographer Honey Daniels (Jessica Alba, of TV's DARK ANGEL) hopes her talent will soon be recognized, but for now she's working three odd jobs: clerk in a record store, dance teacher at the local youth center, and bartender in a Manhattan dance club. Hot director of music videos Michael Ellis (David Moscow, JUST MARRIED, BIG) spots an amateur video of Honey cutting a rug after work, and gives her a shot at the big time when he asks her to choreograph videos for Ginuwine and Tweet. Just as the big checks start rolling in, Honey gets a nasty dose of reality when she rebuffs the director's sexual advances and is blackballed by the industry. Honey throws herself back into her community work with a vengeance and helps two of her most talented students Benny (Lil' Romeo) and Raymond (Zachary Isaiah Williams) stay out of the hands of local drug dealers. HONEY is a 21st-century version of FLASHDANCE or FAME--an infinitely entertaining urban dance movie that gets viewers' feet tapping with high-energy choreography and strings of catchy, cutting-edge tunes.