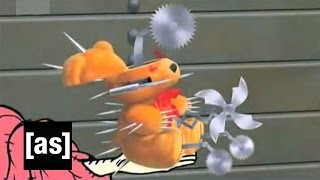 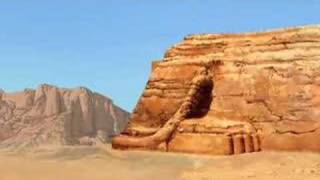 AQUA TEEN HUNGER FORCE is a cult favorite on the Cartoon Network's late-night animation segment, Adult Swim. The show hits the big screen with the strangely titled AQUA TEEN HUNGER FORCE COLON MOVIE FILM FOR THEATERS, and the plot is as convoluted and nonsensical as the title. Bored, and in hopes of attracting women, Meatwad and Master Shake assemble their second-hand workout machine, the "Insane-o-flex." Frylock steps in to help and discovers it's missing a crucial part--the power chip. They recover the chip, and upon installation launch the machine into its real purpose as a killer robot.

This film will be a must-see for hardcore fans of AQUA TEEN HUNGER FORCE, as several of the sub-characters from the series appear in the film. These include the Mooninites, the Plutonians, MC Pee Pants, and Cybernetic Ghost of Christmas Past from the Future. The traits of the three main characters symbolize Freud's three-part structural theory of the psyche: the Ego, Super-ego, and Id--and the concept works as both a feature-length film and as a fun, absurd 15-minute cartoon.