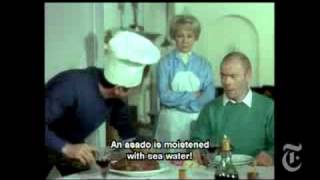 Claude Chabrol crafts a complex social allegory in LES BICHES, a subtle and intricate tale of desire, despair, and murder. Released in March of 1968, just months before the May 1968 student revolts in Paris, Chabrol filtered the ever-increasing class struggle in France into the compelling tale of glamorous Frédérique (Stephane Audran), who picks up poverty-stricken and beautiful Why on the streets of Paris, promptly seducing her and whisking her away to a new life of wealthy bohemia in St. Tropez. As Why quickly assumes the role of Frédérique's protegée and understudy, a complication arrives in the form of Paul (Jean-Louis Trintignant), a handsome young architect with whom Why immediately falls into unrequited love. Frédérique confronts the interloper herself, falls in love with him, and jets off to Paris with him, leaving Why to stew in her rejection and abandonment. The suspense builds slowly when the three lovers forge a strange and erotically charged circular relationship. The décor of Frédérique's Cote D'azur villa, filled with hunting memorabilia, weapons, and muted colors, heightens the tense and underlying power struggle that slowly propels Why to obsession and madness in the film's haunting and detached climax.

The Blonde One
$19.40 Super Savings
Add to Cart

21%off
Innocents With Dirty Hands
$15.70 Super Savings
Add to Cart