Last of the Dogmen [Import] PG

A journey of the heart. The adventure of their lives. 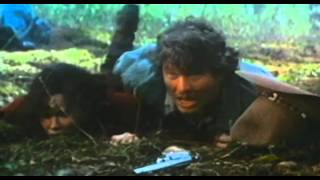 The Last Of The Dogmen Trailer 1995

A mountain man goes on a routine manhunt and finds himself embroiled in solving a supernatural mystery in this fantasy/adventure, The tale is set in the wilds of Montana, Lewis Gates is a heavy-drinking tracker who is called to sober up and hit the backcountry to find three murderous fugitives from the local prison, For him it is a routine assignment, But then a strange thing happens, He is almost upon their camp when he hears several whoops and shouts, He goes to the site, but finds nothing but blood, a lone arrow, and a brief sight of someone fleeing on horseback, He travels back to town and tells his story, but no one believes him, least of all the sheriff whose late daughter had been married to the mountain man before she drowned - something the sheriff still blames the tracker for, But Gates is by then obsessed with solving the mystery and so forces himself into the library to do a little research, He soon learns that over the years 17 such unsolved mysteries have occurred and that in 1935 authorities brought to jail a naked Indian boy found running along the railroad tracks, They locked him in jail, but the boy somehow escaped and disappeared, The tracker enlists the aide of a female anthropologist who explains that over a century ago Cheyenne dog soldiers had lived in the area until the Europeans slaughtered them, The two travel deep into the wilderness and at last discover a strange waterfall, Behind it lies an ancient Cheyenne village, a peaceful place much like the Shangri-La of adventure-fantasy movies past. Note : The wide screen would not fit an entire screen.

The Man From Snowy River
$5.80 Super Savings
Add to Cart

River of No Return (DVD)
$11 Super Savings
Add to Cart