Handcuffed to the girl who double-crossed him 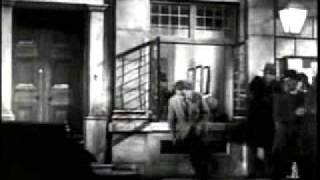 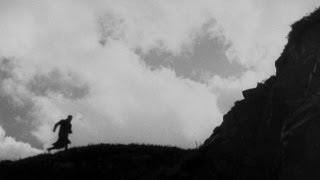 A classic British spy mystery, and one of Hitchcock's best, THE 39 STEPS is the story of an innocent man who struggles to prove his innocence. Robert Donat gets more than he bargained for when he brings home a mysterious woman (Lucie Mannheim) who confesses to be a British agent on the hot trail of a dangerous spy ring. The woman is killed in Donat's apartment and he immediately finds himself on the run, burdened with the charge for her murder and the dangerous knowledge of her mission. The film is distinguished by its pioneering use of contrapuntal sound effects, as well as the dynamism between Donat and his costar Madeleine Carroll.

Richard Hannay (Robert Donat) is a Canadian rancher on vacation in London who sees a vaudeville act at the Palladium in which Mr. Memory (Wylie Watson) draws on his photographic memory to answer questions posed by the audience. When a shot rings out in the theater a frightened young woman approaches Hannay and asks for his help. The woman claims that foreign spies who plan to smuggle valuable military secrets out of the country are after her, and when she herself is later killed, Hannay finds himself both framed as the man responsible for her death as well as the next potential victim of the spy ring. Traversing through rural Scotland, on the run from both the police and the spies, Hannay finds himself attached to a cool but reluctant blonde, and together they have to figure out the meaning of the woman's last words and bring down the spy ring before the precious military secrets are smuggled abroad. THE THIRTY NINE STEPS is the film that established Hitchcock as the master of the mystery spy-thriller.

Shadow of a Doubt
$18.20 Super Savings
Add to Cart