A small-town girl heads to the Big Apple in pursuit of the fiance who jilted her. 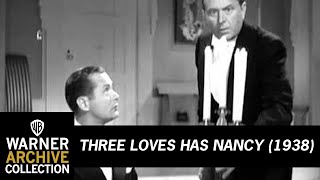 Janet Gaynor portrays small-town girl Nancy Briggs, whose nebbish fiance George (Grady Sutton) doesn't return from his Manhattan job in time to say, "I do." So Nancy heads to the big city to hunt for her hubby-to-be and, after a series of dizzy complications, lands in the apartment of a debonair author (Robert Montgomery), in the romantic sights of his equally debonair pal (Franchot Tone), and in the middle of a three-man boxing match when George suddenly reappears. Will Nancy ever get to the altar? And if so, with whom?

Nancy, a jilted bride-to-be, is played by Janet Gaynor in one of her last starring films. The three loves are novelist Robert Montgomery, publisher Franchot Tone, and gormless nebbish Grady Sutton (Sonny TUFTS''). In New York to find her runaway groom Sutton, Janet runs across Montgomery and Tone. More selective since her unfortunate near-wedding, Gaynor decides to have the two swains demonstrate their worthiness, leading to a brief (and chaste) menage-a-trois in which all three are under the same roof. THREE LOVES HAS NANCY is a sedate screwball comedy, carried completely by the charm of its stars.

Romance | Writers | Romances
This product is made-on-demand by the manufacturer using DVD-R recordable media. Almost all DVD players can play DVD-Rs (except for some older models made before 2000) - please consult your owner's manual for formats compatible with your player. These DVD-Rs may not play on all computers or DVD player/recorders. To address this, the manufacturer recommends viewing this product on a DVD player that does not have recording capability.

26%off
Every Girl Should Be Married
$9.60 Spring Sale
Add to Cart