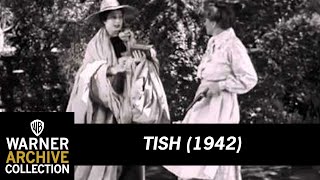 Raw-boned, raspy-voiced, sixty-something Letitia "Tish" Carberry (Marjorie Main) comes back to her hometown with a baby in her arms. "I'm a woman. It's a baby. It's mine!" she declares. Three splendid character actresses -- Main, Zasu Pitts and Aline MacMahon -- play three delightful spinsters in Tish, based on stories by Mary Roberts Rinehart. The old dears try their hands at matchmaking, get everything in a dreadful muddle, and end up caring for an orphaned baby they mistakenly believe is illegitimate.

In this comedy, the town gossip fills her time running the lives of others. Naturally, she is also a matchmaker. When she tries to find a suitable mate for her nephew, trouble ensues because he only has eyes for the daughter of the busybody's nemesis, the town judge. Meanwhile the girl the town yente wanted for her nephew finds herself attracted to the judge's son and ends up marrying him on the sly. He impregnates her and then goes to war. She later gives birth, but dies before she can tell anyone the truth. To protect her, the old gossip begins claiming the babe as her own. No one believes her. Fortunately, the judge's son returns and tells the truth.

Death | Justice | Romance | Parenthood | Small Towns | Parents | Romances | Love
This product is made-on-demand by the manufacturer using DVD-R recordable media. Almost all DVD players can play DVD-Rs (except for some older models made before 2000) - please consult your owner's manual for formats compatible with your player. These DVD-Rs may not play on all computers or DVD player/recorders. To address this, the manufacturer recommends viewing this product on a DVD player that does not have recording capability.