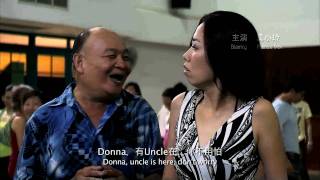 Uncut - 05/01/2008
4 stars out of 5 -- "[T]his really is Sally Hawkins' show. Her performance is every bit as bold as that of David Thewlis in NAKED.....This journey into optimism is a very welcome diversion."
Empire - 05/01/2008
4 stars out of 5 -- "HAPPY-GO-LUCKY is a genuine feelgood film. There's a good chance that you'll wish you could face all life's tribulations Poppy-style."
Sight and Sound - 05/01/2008
"Hawkins' virtuoso performance captures Poppy's comic qualities....Upbeat and accessible..."
Film Comment - 09/01/2008
"Hawkins has a ball with the extroverted, clownish aspects of her character, and she's no less compelling in the delicate, pensive scenes where she tries to regain her equilibrium."
Rolling Stone - 10/16/2008
3.5 stars out of 4 -- "[Leigh] keeps the emotions in balance by keeping them real....HAPPY-GO-LUCKY is more than movie, it's a gift."
USA Today - 10/10/2008
"[HAPPY-GO-LUCKY] is a decidedly clear-eyed exploration of the challenged of being happy. And, as such, it's both an enjoyable comedy and a fascinating character study."
Los Angeles Times - 10/13/2008
"Played by Sally Hawkins in a performance that one the Silver Bear for best actress at the Berlin Film Festival, Poppy practically defines irrepressible."
New York Times - 10/10/2008
"[T]he film is so closely tuned to the pulse of communal life, to the rhythms of how people work, play and struggle together, it captures the larger picture along with the smaller....[An] expansive, moving film..."
Premiere - 10/15/2008
"In HAPPY-GO-LUCKY, Sally Hawkins offers an Oscar-worthy performance as Poppy, the funny, kind-hearted, and mischievous protagonist."
Entertainment Weekly - 10/17/2008
"Hawkins imbues Poppy with an innate effervescence that plays off beautifully against adversity." -- Grade: A-
Chicago Sun-Times - 12/05/2008
"Mike Leigh's uncanny ability to find drama in ordinary lives is used with genius....Strangely inspiring."
Entertainment Weekly - 12/26/2008
Included in Entertainment Weekly's 2008 Films Of The Year -- "The marvel of HAPPY-GO-LUCKY is that Hawkins and director Mike Leigh end up winning over even the gloomiest Guses..."
Wall Street Journal - 11/18/2010
"Sally Hawkins gives an astonishing performance in Mike Leigh's one-of-a-kind comedy..."

In a shift away from his usual exploration of the dark and dreary, director Mike Leigh (VERA DRAKE) takes a lighter look at life with HAPPY-GO-LUCKY. The film chronicles the daily comings and goings of 30-year-old Poppy, whose positive, easy-going outlook epitomizes the title. Poppy is a primary school teacher who lives in London with her best friend, Zoe (Alexis Zegerman). We follow Poppy through her daily routines: going clubbing with her friends, preparing exercises for her class, going to the chiropractor, and taking flamenco lessons. Nothing truly remarkable happens to Poppy, and yet, her boundless good cheer and childlike delight make her smallest endeavors incredibly engaging. Poppy's smile is put to the ultimate test after she decides to take driving lessons and is assigned to Scott (Eddie Marsan), a paranoid, rage-filled instructor who verbally abuses her throughout her lessons. Poppy continues to see him, week after week, despite his escalating tantrums. Meanwhile, at work, a young student has been acting out in class, and Poppy must call in a very handsome social worker for assistance. She and the social worker eventually go on a date, which ends up becoming a catalyst for her driving instructor's climactic meltdown and confrontation with Poppy.

The film is a fascinating character study, and Hawkins is excellent as Poppy, striking just the right chord of cheerfulness without coming off as obnoxious. It also offers a refreshingly upbeat and realistic look at life for the 30-something urban woman. Poppy lives her life to the fullest--in the real world, without any clichéd SEX AND THE CITY pretensions. HAPPY-GO-LUCKY is whip-smart and full of surprises: just when you are certain the story is going to veer in a certain direction, Leigh gently nudges you down a different path. And you are glad of it.