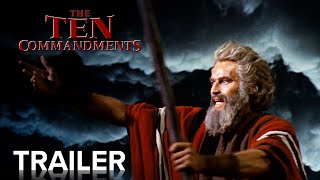 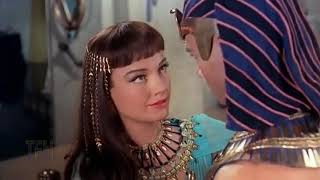 This spectacular biblical epic from legendary showman Cecil B. DeMille tells the story of Moses from his infancy to the triumphant moment when he led the Israelites out of captivity in Egypt. The film begins as the pharaoh's daughter (Yvonne De Carlo) discovers the abandoned infant Moses and takes him to the shelter of her family. Charlton Heston stars as the young man raised by the pharaoh as an Egyptian prince. Moses is righteous and kind, the favored successor to the kingdom, which results in the deep-seated jealousy of Prince Rameses (Yul Brynner). Rameses and Moses compete for the throne and the love of the young princess, Nefretiri (Anne Baxter), until Moses learns the truth about his origins and joins the Jewish slaves in their fight for freedom. After receiving the Ten Commandments from God, Moses helps free the Jews from the pharaoh's tyrannical rule, surmounting all obstacles in his way--including the parting of the Red Sea, in one of the movie's most famous scenes. Cecil B. DeMille's extravagant final film--and remake of his silent 1923 version--is a legendary combination of the master showman's love of historical realism, spectacle, lavish scenic design, and dizzying crowd sequences. The exodus alone is a stunning feat of modern cinema, featuring thousands of actors trekking through the arid desert as Pharaoh's chariots chase after them.

18%off
The Ten Commandments
$10.60 Super Savings
Add to Cart