They're not just getting rich... They're getting even. 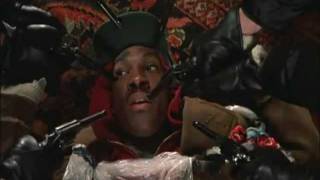 In this screwball comedy of manners, millionaire commodity brokers Randolph and Mortimer Duke (Don Ameche and Ralph Bellamy) wager a bet that pits environment vs. biology and turns the lives of their two unsuspecting victims upside down. Eddie Murphy costars as Billy Ray Valentine, a streetwise hustler who gets dragged off the street and into the proper life of top Duke Bros. broker Louis Winthorpe III (Dan Aykroyd), who in turn gets tossed out of his posh townhouse and onto the mean city streets. The comic team of Murphy and Aykroyd is deliriously funny as they both struggle to comprehend their new lives. Billy Ray is forced to learn proper etiquette, manners, and business sense while uptight Louis scrambles to make it on the streets, befriending a prostitute (Jamie Lee Curtis) who takes him in and saves him from starvation--or worse. When the two innocent victims realize the scheming brothers' plot, they unite and devise a fabulous revenge to prove that their lives can't be controlled by the power-grubbing Duke brothers. The film features outstanding work by Denholm Elliott as the butler and Curtis as the prostitute with a heart of gold. Curtis especially shines in the scene in which she removes all of her hustler accoutrements to reveal her true looks.

As the result of a bet between two wealthy commodities traders, the lifestyles of a street hustler (Eddie Murphy) and a blue-nosed employee (Dan Akroyd) of the brokerage are reversed. The innocent victims of the bet scramble to make it in their new foreign environments, with hysterical results. Once they discover the switch played on them, they set out to exact their comic revenge on the execs, played by the grand old actors Ralph Bellamy and Don Ameche..