Shut up or die. 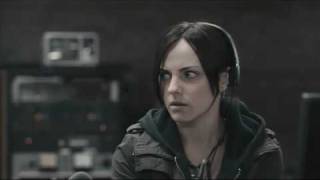 Box Office - 04/23/2009
4 stars out of 5 -- "As much about ideas as it is about generating scares, the film is an arresting linguistic mystery..."
Film Comment - 05/01/2009
"[T]his wildly imaginative siege drama/psuedo-zombie flick, confined almost entirely within a radio broadcast studio, makes good on the promise of Canadian maverick Bruce McDonald's preceding feature THE TRACEY FRAGMENTS."
New York Times - 05/29/2009
"[A] small Canadian horror film that makes the most of its miniscule budget....The film captures the monotonous daily rituals of broadcasting from inside a studio that feels so sealed off from the outside world that nothing beyond the sound booth seems real."
A.V. Club - 05/28/2009
"[T]he film works as a tour de force for McHattie -- a veteran character actor making the most of his character's long, fluid monologues -- and as a sly commentary on journalistic responsibility." -- Grade: B+
Hollywood Reporter - 06/01/2009
"[T]here are a few effective jolts, and the script has flashes of macabre wit that McHattie relishes. His character is well drawn, and his commanding performance is the best reason to consider seeing the movie."
Total Film - 10/01/2009
3 stars out of 5 -- "[T]his claustrophobic chiller captures the hysteria of a town flailing on the frontline of disaster."

It's not just the snow storm that's chilling in this Canadian zombie movie from director Bruce McDonald (THE TRACEY FRAGMENTS). Stephen McHattie (WATCHMEN) stars as controversy-courting radio DJ Grant Mazzy, who can only find work in Pontypool, Ontario, where he broadcasts his show from the church basement. The monotony of relaying the small-town news of a blizzard is broken when Grant begins to report strange stories of violence to his listeners. It is soon revealed that there's a virus infecting the whole town, and Grant and his coworkers barricade themselves in the office. But the virus doesn't use the standard methods of blood or air for its transmission; instead, language is responsible for the disease, which leaves Grant wondering whether it is better to spread the news or keep quiet.

The Innkeepers
$5
Add to Cart