Dean Stockwell is an orphaned English boy in 1880's India who disguises himself as a native and has adventures in the British secret service. 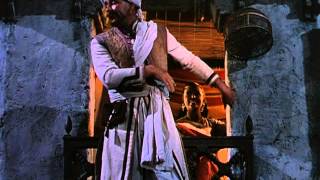 The boy Kim knows how to scrounge up a hot meal in India's bustling cities, how to scamper catlike across rooftops, and disguise himself as a local and conceal his Anglo heritage. To Kim, these are just ways to be free. To colonial British intelligence, they're skills it knows will be useful when it makes Kim a spy.

Rudyard Kipling's 1901 tale of the horse trader and secret agent who introduces young Kim to the dangerous ways of espionage in 19th-century India.

This colorful adaptation of the Rudyard Kipling classic novel stars Errol Flynn as Mahbub Ali, and the young Dean Stockwell as the eponymous hero.
Kim, an orphaned boy, risks his life to spy for the British, gathering information about the Russian forces out to conquer India for the Tsar.

31%off
Across to Singapore
$8.98 BLACK FRIDAY
Add to Cart

Against All Flags
$19
Add to Cart

31%off
The Strange Love of Molly Louvain
$8.98 BLACK FRIDAY
Add to Cart

38%off
The Charge of the Light Brigade
$11.13 BLACK FRIDAY
Add to Cart

31%off
The Adventures of Huckleberry Finn (DVD-R)
$8.98 BLACK FRIDAY
Add to Cart