Knights of the Round Table
Warner Archive Collection (series)

The legend of King Arthur comes alive in this Oscar-nominated picture starring Ava Gardner as Lady Guinevere, Robert Taylor as Sir Lancelot and Mel Ferrer as the noble King Arthur. 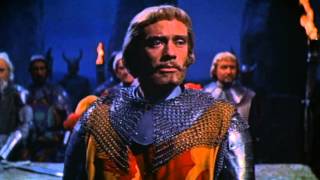 Knights of the Round Table (Trailer)

Long live King Arthur and Camelot! Yet in all of ancient England's newfound peace there is "a fraying link in Arthur's chain": the growing passion between heroic knight Sir Lancelot and beautiful Queen Guinevere.

One of history's most beloved legends is vibrantly retold in an adaptation downplaying fantasy elements and giving 6th-century England a new kind of fantasy: a dazzling Hollywood sheen bursting with the CinemaScope-sized pageantry, conflicts and imposing citadels of location-lensed 1950s spectaculars. Robert Taylor is Lancelot, sworn to serve his king (Mel Ferrer) but devoted to his queen (Ava Gardner).

MGM's first production in cinemascope, this is the story of King Arthur and his Knights of the Round Table. Lancelot, banished from the court for his affair with Guinevere, returns in disguise to destroy the greatest threat to Camelot - Arthur's illegitimate son, Modred. Academy Award Nominations: Best (Color) Art Direction-Set Direction, Best Sound Recording.

As Sir Lancelot and his soldiers wage a battle in medieval England, he is also trying to win the heart of Guinevere--who just happens to be married to King Arthur...

Adventure | Medieval | War
This product is made-on-demand by the manufacturer using DVD-R recordable media. Almost all DVD players can play DVD-Rs (except for some older models made before 2000) - please consult your owner's manual for formats compatible with your player. These DVD-Rs may not play on all computers or DVD player/recorders. To address this, the manufacturer recommends viewing this product on a DVD player that does not have recording capability.

The Adventures of Robin Hood
$14.50
Add to Cart

The Black Shield of Falworth
$19
Add to Cart

King Arthur: Legend of the Sword
$6.40
Add to Cart