Raquel Welch stars as an exotic dancer stalked from Las Vegas to Los Angeles by the psychopathic ex-husband of her friend, who blames her for the break-up of their marriage. 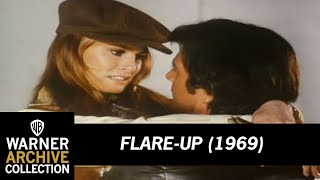 A homicidal maniac engages a frightened young woman in a deadly game of cat and mouse in this harrowing suspense thriller starring Raquel Welch. When Alan Morris (Luke Askew) guns down his estranged wife in cold blood, no one is more terrified than Michele (Welch), the Vegas showgirl Alan blames for turning his wife against him. Realizing that she's the murderer's next target, Michele begins a desperate game of hide-and-seek, hoping to elude Alan in the crowded streets of Los Angeles. After several near misses, the killer finally corners his elusive prey, leading to a showdown that ignites the screen in a blaze of fury.

A trio of Las Vegas go-go dancers are pursued by a homicidal maniac in this suspenseful murder thriller. Alan Morris (Luke Askew) murders his wife when she seeks a divorce then goes after her three friends. Believing the women have turned his wife against him, Alan hunts down the dancers and kills one of them. A terrified Michele (Raquel Welch) flees to Los Angeles where she takes a job at a club called The Losers. She falls for the parking-lot attendant Joe (James Stacey) and romance blossoms between the two. Unfortunately, the vengeful husband Alan tracks her down and threatens to kill Joe before her eyes, but Michele is ready for him; she douses the killer with gasoline and lights a match.

Dance | Romance | Thriller | Injustice | Melodrama | Marriage | Stalkers | Crime | Revenge | Friendships | Dancing | Romances
This product is made-on-demand by the manufacturer using DVD-R recordable media. Almost all DVD players can play DVD-Rs (except for some older models made before 2000) - please consult your owner's manual for formats compatible with your player. These DVD-Rs may not play on all computers or DVD player/recorders. To address this, the manufacturer recommends viewing this product on a DVD player that does not have recording capability.