The power of seven become a league of one.

584K ratings
Currently Out of Stock: We'll get more as soon as possible
Notify Me When Available
Add to Wishlist
Format:  Blu-ray
sku:  9JDG
92% recommend us! 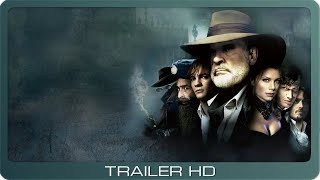 The League Of Extraordinary Gentlemen ? 2003 ? Trailer

Stephen Norrington's THE LEAGUE OF EXTRAORDINARY GENTLEMEN begins in 1899 London where, due to some cataclysmic events in England and Germany, the world is on the brink of war. Mycroft Holmes (Richard Roxburgh) is sent by the British government to round up various figures from Victorian-era literature in an attempt to find some solution. First on the list is explorer Allan Quatermain (Sean Connery), quickly installed as leader of the ramshackle outfit. Among the plethora of mythical figures joining Quatermain are The Invisible Man, Captain Nemo, Jekyll and Hyde, Dorian Gray, and many others. Initially the League are sent to Prague to prevent a series of bombs from exploding, causing some spectacular set pieces as the merry band of rogues use all their special skills to fend off the evil forces. This is only the start of their journey however, and there are plenty of surprises for these courageous battlers, not least when they discover who is really behind all the chaos they have tried so hard to control.

Working with material from comic book veteran Alan Moore (who also penned FROM HELL), director Norrington (BLADE) draws on some interesting traits and legends from his characters, such as Dorian Gray's painting and Dr. Jekyll's potion. Making sure each member is far from infallible, Norrington paints a sympathetic portrait of flawed heroes battling against the odds, with some spectacular action sequences, and humorous asides.