Currently Out of Stock: We'll get more as soon as possible
Notify Me When Available
Add to Wishlist
Format:  Blu-ray
sku:  ESFC
Also released as:
Pathfinder (Unrated) for $6.50
91% recommend us! 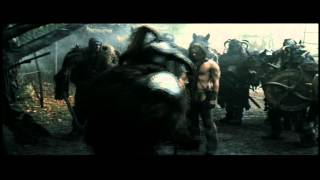 Wearing its R rating for violence like a badge of honor, PATHFINDER bears more resemblance to a horror film than most of its historical action-film brethren. Director Marcus Nispel cut his teeth on the remake of TEXAS CHAINSAW MASSACRE, and that experience has left a bloody thumbprint on this film. PATHFINDER shares the horror movie aesthetic, with its generous use of blood, jump moments, and shadow. Centuries before Christopher Columbus reached American shores, the Vikings carved a bloody path through the continent. When a shipwreck kills a boat full of Vikings and their Native American captives, the only survivor is a young blond child. Adopted by the People of the Dawn tribe, the boy grows up into a warrior. As an adult, the former Viking, now named Ghost (Karl Urban, THE LORD OF THE RINGS: THE RETURN OF THE KING), is an important member of his tribe with only disturbing memories to tie him to the Norsemen. When another ship of Vikings destroys his village and all he knows, he vows revenge.

This remake of the Norwegian film OFELAS boasts several innovative action sequences, one involving a shield used as a sled in the snow. With his work in the Lord of the Rings films, Urban has perfected his talent at swordplay, and his prowess is evident here. His character takes on the Viking invaders almost single-handedly and stalks them, picking them off one by one. This is an action-filled film that doesn't let dialogue get in the way of the elaborate fight scenes.

24%off
The Pathfinder / Song of Hiawatha
$7.60 Super Savings
Add to Cart