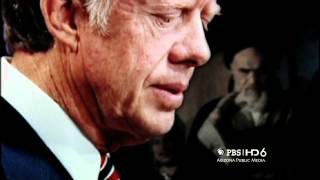 A peanut farm in Plains, Georgia, provided the upbringing for the 39th President of the United States, James Earl Carter, Jr. After spending over a decade in the Navy, this country boy began his political life fighting the corrupt, segregationist southern system as he would rise to the Governor's office. He surprisingly won the Democratic nomination for President in 1975 and used an outsider persona to beat incumbent Gerald Ford in a tight race. Carter's term was plagued with controversy. Rising taxes, a troubled economy, the exploits of his brother Billy, the infamous "malaise" speech, and the Iranian hostage crisis all contributed to his fading popularity. Carter did succeed in developing a wise long-term energy plan and creating landmark negotiations between Israel and Egypt in the Camp David summit. Slaughtered by Ronald Reagan in the 1980 elections, Carter's post-presidency period would be characterized by his untiring humanitarian efforts. This program, examining the former President, was completed before Carter received the 2002 Nobel Peace Prize. Its PBS premiere came only a month after Carter accepted the award.

Jimmy Carter: Man from Plains
$4.98 on Sale
Add to Cart

20%off
Nixon - The American Experience
$19.90 Super Savings
Add to Cart

46%off
That's Black Entertainment - Comedians
$6.98 on Sale
Add to Cart