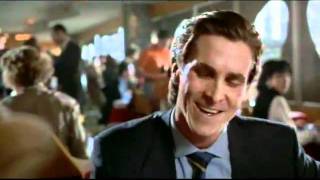 A cunning indictment of the materialism of the 1980s, AMERICAN PSYCHO is Mary Harron's (I SHOT ANDY WARHOL) and Guinevere Turner's (GO FISH) deft interpretation of the dark and violent Brett Easton Ellis novel of the same name. Christian Bale (VELVET GOLDMINE) plays Patrick Bateman, the personification of the "me" culture of Ronald Reagan's 1980s. Imprisoned in an inane corporate existence fueled by status symbols, small talk, and gossip, Bateman begins a bloody reign of terror on nearly all that cross his path. The film's gray and navy mise-en-scene is filled with chilly, vacant streets, hard-edged skyscrapers and cold interiors flecked with the latest technological gadgets and designer flourishes. Mary Harron's camera glides through these spaces with the undisturbed detachment of a shark. Bale is a razor sharp Bateman whose cool, predatory grace is only matched by the equally indifferent corporate world in which he lives. Even during its most hideous scene, when a naked, chain-saw-toting Bateman goes on a screaming rampage, AMERICAN PSYCHO manages to project a cold indifference that has terrifying undertones. Harron's film is a frightening denunciation of a consumer culture gone amuck with greed, materialism and a lack of nearly any charity whatsoever.

Satire | Theatrical Release | New York City | Based On A Novel

The Silence of the Lambs (Blu-ray)
$9.80 Super Savings
Add to Cart

18%off
Baseball Furies
All American Psycho
$20.40
Add to Cart