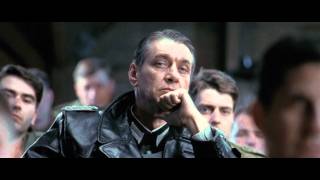 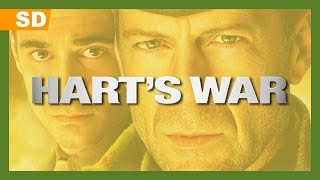 Director Gregory Hoblit's debut feature was the tricky courtroom drama PRIMAL FEAR. With his fourth feature, HART'S WAR, Hoblit is back with another. This time the court is inside a WWII prisoner-of-war camp. The defendant is Lieutenant Lincoln Scott (Terrence Howard), a black officer accused of killing a racist sergeant (Cole Hauser). Scott's lawyer is Lieutenant Tommy Hart (Colin Farrell), a second-year law student at Yale. A U.S. senator's son, Hart was having a relatively easy war until he was captured, interrogated, and sent to Stalag VI. The camp commandant is the urbane, charming, and ruthless SS Major Visser (compellingly played by Rumanian actor Marcel Iures). The ranking American officer at the camp is Colonel William McNamara (Bruce Willis), and Hart is soon in conflict with him. When Scott is accused of murder, McNamara insists that the prisoners should hold a court martial, and he appoints Hart counsel for the defense. At the court martial, Hart finds his client is being railroaded, although he gets help from unexpected quarters. Intricately plotted by scriptwriters Billy Ray and Terry George, and filmed by Hoblit with his accustomed attention to detail, HART'S WAR is a devious and absorbing courtroom/POW drama.

We Were Soldiers
$6.50 Super Savings
Add to Cart