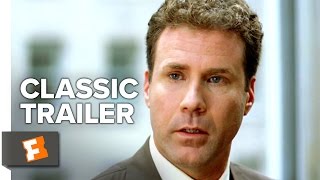 Known to most audiences for his hilarious characters, funnyman Will Ferrell continues to try his hand at more serious material with STRANGER THAN FICTION. The film comes as relatively light fare for director Marc Forster, whose previous works were FINDING NEVERLAND and MONSTER'S BALL. While not exactly a drama, the film shifts between humorous and heavy realms, one of its central questions being: "What makes a comedy or a tragedy'" In WINTER PASSING and MELINDA AND MELINDA, Ferrell awkwardly occupied a strange space that was neither clearly dramatic nor comedic, leaving audiences confused over whether to laugh at the actor or with him. Here, in the role of boring Harold Crick he appears a bit more at ease, as Harold is not expected to be funny--funny things just happen to him. Instead of depending on Ferrell for jokes, the film delivers laughs on its own by exploring what happens when an IRS agent with a dull, solitary life receives unwanted company in the form of an intrusive female voice narrating his every move. As distracting as this is, things become truly worrisome when the narrator (Emma Thompson as an eccentric author) informs Harold of his looming death.

How Harold's life changes as a result of this terrifying knowledge depends largely on wacky Professor Jules Hilbert (Dustin Hoffman) and on tax-evading baker/love interest Ana Pascal (Maggie Gyllenhaal). While Queen Latifah's role as an author's assistant is underdeveloped, Tony Hale brings an innocent charm as Harold's coworker and only friend. At times, the film's take on existentialist themes feels strikingly familiar, and is clearly influenced by features like ADAPTATION and I HEART HUCKABEES. Among its strengths, the film features interesting sets seemingly influenced by the 1950s version of the future, and functions as a small step forward for Ferrell.