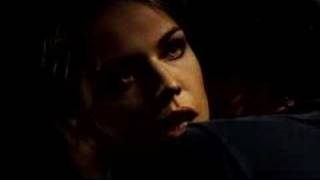 A good-looking pack of werewolves that has ruled Bucharest for 5,000 years becomes threatened when one among them begins to question the traditions they have adhered to over the centuries. Vivian (Agnes Bruckner, DREAMLAND) is a teenage werewolf whose destiny has been tied to her pack since she was orphaned at a young age. The pack's menacing leader, Gabriel (Olivier Martinez, BEFORE NIGHT FALLS), has designs on Vivian, and hopes to make her his next wife, while the rest of Vivian's "family" keeps a close watch on her every move. This makes things difficult when Vivian, against her better judgment, begins a tentative relationship with Aiden (Hugh Dancy, THE JANE AUSTEN BOOK CLUB), a graphic artist who has come to the city to study the mythical loup-garou for his next book. Vivian tries to keep her growing love a secret, but when Gabriel discovers that she has feelings for a human, he sets off a chain of events that threaten to destroy the pack--or change its bloodthirsty ways. Vivian and the extraordinary Aiden--who manages to outwit the loup-garou in ways they never thought possible--are forced to go on the run, but they must eventually face Vivian's pack in a confrontation that forces all to examine what keeps man and beast constantly at war. The film's setting in moody, beautifully dilapidated Bucharest adds an air of mystery that the special effects struggle to match. Hugh Dancy is a charmer, and the tale is a mixture of Gothic myth and teenage romance that will appeal to fans of UNDERWORLD and THE CROW.

A werewolf tale from the producers of Underworld, Blood & Chocolate tells the tale of Vivian (Agnes Bruckner), a young teenage girl who must choose between her love for a young artist and loyalty to her werewolf lineage. Others may have secrets, but none as extraordinary as Vivian. One of the last of her kind, she comes from a line of loup garoux, shape shifters able to transform into the form of both human and wolf at will. When Vivian's affections for a visiting artist threaten to reveal her family's secret society, she must decide whether to follow her heart or betray the secret vows of her family.