It Will Cost You Everything 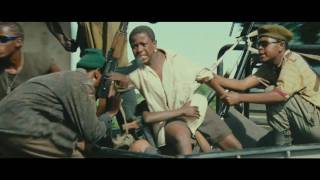 Set in Sierra Leone, BLOOD DIAMOND explores the role of diamond trading in the African civil war of the late 1990s. Narrowly escaping death when his village is invaded by R.U.F. militia, farmer Solomon Vandy (Djimon Hounsou) is enslaved at a diamond mine and has his family taken from him. When he discovers an unusually large stone he buries it, knowing it may be his only tool for retrieving his family. While Vandy is imprisoned, white African diamond smuggler Danny Archer (Leonardo DiCaprio) overhears an angry R.U.F. leader shouting at the farmer about the missing diamond, and he gets Vandy out of jail, then bribes him with the promise that he will help find Vandy's family in return for half the diamond's worth. Bonded by a common goal, the two men clash over drastically different values, but manage to stick together in pursuit of the prize. Also playing a part is fearless American journalist Maddie Bowen (Jennifer Connolly), whose flirtations with Archer and obsession with the truth land her in the middle of the bloody action. As the three embark on a dangerous journey filled with close calls, unlikely bonds form that threaten to change Archer's unfeeling ways. Meanwhile, a plotline following Vandy's beloved son shows us the horror being done to and by child soldiers at the hands of the so-called freedom-fighting rebel forces.

Addressing his serious subject with passion and skill, director Edward Zwick (THE LAST SAMURAI) delivers impressive action sequences that feel horrifically real without seeming excessive. While some critics have taken stabs at the film for its Hollywood elements, no one can argue against BLOOD DIAMOND's noble intentions or its stellar performances. To most viewers, the film is likely to provide a disturbing and educational look at a world many know little about.