You think it is over...but the games have just begun 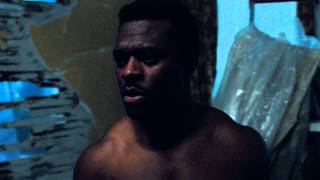 The fourth SAW film takes fans into uncharted waters. Now that John/Jigsaw (Tobin Bell) is dead, screenwriters Patrick Melton and Marcus Dunstan (writers of the Project Greenlight-produced FEAST) give us Jigsaw's "origin" story--finally showing us why he does what he does. Along they way, they still find time to work in the usual dose of elaborate Rube Goldberg-like torture devices and heaps of MPAA-defying gore in what plays like an extreme version of CSI. During his (extremely graphic) autopsy, Jigsaw's final tape (swallowed in SAW III) is found in his stomach. Promising that his work will continue despite his passing, his message sets off a series of grisly tasks for anxious SWAT team leader Rigg (Lyriq Bent), who is given 90 minutes to rescue detectives Matthews (Donnie Wahlberg) and Hoffman (Costas Mandylor), who are to be dispatched via blocks of ice and high voltage wires. Trailing Rigg are FBI agents Strahm (Scott Patterson of GILMORE GIRLS) and Perez (Athena Karkanis), who get some unexpected blood on their hands along the way. A series of flashbacks details a pivotal event between Jigsaw and his girlfriend, Jill (1980s beauty Betsy Russell, PRIVATE SCHOOL), which inspired him to devote the remainder of his life to the creation of his signature puzzles.

Darren Lynn Bousman, director of the previous two sequels, returns once again to ensure that the series retains its trademark desaturated look. Though viewers starting with this installment may find the brief glimpses of characters from the previous films confusing, fans should be pleased with how the films link together. They are also sure to appreciate that, like FRIDAY THE 13th carrying on sans Jason in PART IV: A NEW BEGINNING, the death of Jigsaw won't keep the franchise from evolving into SAW V and beyond.