The Assassination of Jesse James by the Coward Robert Ford R

260K ratings
Currently Out of Stock: We'll get more as soon as possible
Notify Me When Available
Add to Wishlist
Format:  DVD
sku:  FHVC
Also released as:
The Assassination of Jesse James by the Coward Robert Ford (HD DVD + DVD) for $4.19
More products that might interest you:
Classic Western Collection: 20 Full Color Vintage Movie Postcards (Movie Collectible) $4.78
Our customers love us! 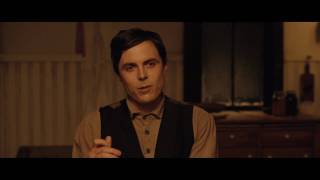 Based on the 1983 novel by Ron Hansen, THE ASSASSINATION OF JESSE JAMES BY THE COWARD ROBERT FORD captivatingly depicts the final few months of the legendary Jesse James's life. He was 34, and his days of ruthless robbing had dwindled, yet his fearsome reputation continued to swell. With an abundance of nickel-books retelling his brutal gun-slinging adventures, James (portrayed by Brad Pitt, in one his most convincing and moving roles) had become a symbolic hero for many Americans, and a dazzling tabloid icon for the 19th-century media. A particular young man seduced by the wonderment of James, the shifty Robert Ford (a breakthrough performance by Casey Affleck), wormed his way in as a James groupie, in the hopes of snagging a coveted spot alongside his brother Charley (played by the always affable Sam Rockwell) as one of the bandit's cronies. Ford, fiercely insecure and painfully aware that he would never be taken seriously by James (who, ever-plagued by paranoia and skepticism, found Ford's earnest obsession a bit unsettling), grew increasingly angry with his idol, leading to a destructive path that ultimately ended in the anticlimactic death of Jesse James--and brought the treacherous Robert Ford the notoriety he had always wanted.

Although this film takes place in the late 1800's, its eerie relevance to modern-day celebrity-obsession scandals is astounding, and adds a fresh scope to what could be viewed as just another cinematic western. Director Andrew Dominick (CHOPPER) furthers the film from its genre by banishing clichéd bullet-infested showdown scenes, instead embracing the relationships and interactions of the outlaws, and creates a mood of brooding and contemplation with exceptional camera angles and lighting. His intensely sophisticated approach to filmmaking illustrates the darkest corners of the characters, and insightfully provides a deeper, heartfelt portrayal revealing what the men might have been like behind their masks.