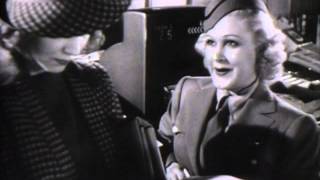 Cleared for takeoff: Flight Angels, an aviation programmer steeped in man-woman attitudes of its time. The story is centered on commercial pilots eager to fly higher (during off-hours they're designing a high-altitude plane) and up-in-the-air attendants eager to land a man (exchanges between the femmes in the Stewardess Lounge are exceptionally catty). Virginia Bruce and Jane Wyman portray two of the title's Angels. Dennis Morgan plays the pilot whose eye problems result in him being grounded by his superintendent (Ralph Bellamy) and sent to the classroom to instruct future flight attendants. He refuses to stay grounded, test-piloting his experimental stratospheric aircraft without authorization.

A barely disguised rip-off of 20th Century-Fox's all-female TAIL SPIN (39), Warner Bros.' FLIGHT ANGELS is an inexpensive "tribute" to airline stewardesses. Among the angels of the title are haughty Virginia Bruce and hoydenish Jane Wyman, who in one scene actually come to blows over their long-simmering rivalry. Dennis Morgan, Wayne Morris and Ralph Bellamy are among the men who do the "real" work above the clouds. The climax involves a pilot who loses his sight, compelling the stewardess on board to perform "above and beyond " etc. Keep an eye out for FLIGHT ANGELS bit players Jan Clayton, later Tommy Rettig's mother on the TV series LASSIE; and DeWolfe Hopper Jr., who changed his name to William Hopper and played Paul Drake on PERRY MASON.

Adventure | Rivalry | Romance | Romances | Flying
This product is made-on-demand by the manufacturer using DVD-R recordable media. Almost all DVD players can play DVD-Rs (except for some older models made before 2000) - please consult your owner's manual for formats compatible with your player. These DVD-Rs may not play on all computers or DVD player/recorders. To address this, the manufacturer recommends viewing this product on a DVD player that does not have recording capability.