Stand by for Action

An "old Noah's Ark," scoffs Lt. Masterman, a Harvard-schooled Bostonian ensconced in a cushy desk job. Care to guess who will be volunteered to be the aged ship's executive officer? 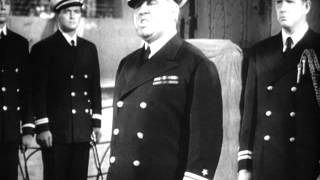 Stand by for Action (Trailer) 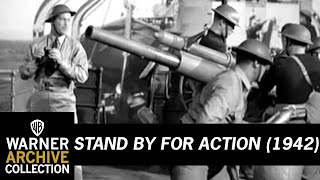 Stand by for Action (Preview Clip)

Not long after Pearl Harbor, the U.S. scrambles for ships to put to sea -- ships like the dry-docked WWI destroyer Warren. An "old Noah's Ark," scoffs Lt. Gregg Masterman (Robert Taylor), a Harvard-schooled Bostonian ensconced in a cushy desk job. Care to guess who will be volunteered to be the aged ship's executive officer?

The character of a callow young man who ultimately proves his worth is one Taylor had played before, notably in A Yank at Oxford and Flight Command. A stellar cast joins him in a tale that veers into comic waters (the crew become awkward caretakers of a bevy of infants rescued at sea) before steaming full ahead into the strategies and salvos of fiery battle action in the Pacific.

Rear Admiral Stephen Thomas' (Charles Laughton) spoken tribute to "the finest Naval officer I knew" provides the framework for the wartime flag-waver STAND BY FOR ACTION. Robert Taylor stars as Gregg Masterman, a flippant socialite who comes to realize his obligation to his country when he is called to active duty during WW II. Determined to get sea duty, Lt. Masterman is passed over by Admiral Thomas in favor of Lt. Cmdr. M. J. Roberts (Brian Donlevy), who, unlike our academy-trained hero, rose from the ranks to his present position of authority. Any differences between Masterman and Roberts are forgotten in the climactic attack against a formidable Japanese "super-battleship." Though there's precious little room for romance in this essentially all-male entertainment, STAND BY FOR ACTION offers Robert Taylor a brief dalliance with up-and-coming MGM starlet Marilyn Maxwell.

Adventure | War | Heroes | Japan | Battles | Boats
This product is made-on-demand by the manufacturer using DVD-R recordable media. Almost all DVD players can play DVD-Rs (except for some older models made before 2000) - please consult your owner's manual for formats compatible with your player. These DVD-Rs may not play on all computers or DVD player/recorders. To address this, the manufacturer recommends viewing this product on a DVD player that does not have recording capability.

The Gallant Hours
$19
Add to Cart

The Affairs of Cellini
$19
Add to Cart