Get email alerts for The Bamboos
Available: Usually ships in 1-3 business days
Only 4 copies left
Add to Cart
Add to Wishlist
Format:  CD
sku:  ZDPX 5233
Our customers love us! 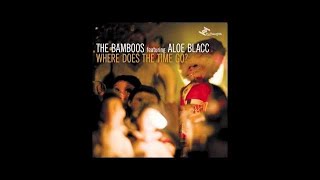 The Bamboos - Where Does The Time Go? feat. Aloe Blacc (Music Video)

In 2006, Lance Ferguson formed the Bamboos in Australia based on the inspiration of hard instrumental funk … la the Meters and the D.I.Y. aesthetic of the Dap-Kings. Half-a-dozen albums and numerous singles later, the Bamboos have expanded from their original quartet to become a ten-piece powerhouse. Medicine Man is a prime example of not only their ambition, but their expertise. For some time the band has employed vocalists -- Tru Thoughts labelmate Kylie Auldist is their most consistent collaborator. A listen to the sunshine soul of album opener "Where Does the Time Go," featuring Aloe Blacc, or Megan Washington's gorgeous voice on the midtempo, "The Wilhelm Scream" appended by a small string section, may have listeners initially puzzled; but the cracking breaks of Graeme Pogson's snare and Ferguson's high-wire bass and guitar strut quickly reveal the Bamboos signature swagger. Other standouts here include the fingerpopping bite of "I Never," that contrasts beautifully with Daniel Merriweather's emotive vocal. Auldist's excellent tracks include the raw, reverb-laden psyc- funk of "Cut Me Down" and the more traditionally Meters-esque grime that is "What I Know." The straight-up Stax-styled, horn-driven soul on "Midnight" is brought home by Bobby Flynn's lead vocals, and gets a nice textural twist with the strings and a glockenspiel on the refrain. Ella Thompson sings on the mod-era groove of the title track, and she duets with Auldist on the album's strangest cut, "Hello Stranger." Here, baroque pop meets psychedelia; the only nod to funkiness are Pogson's breakbeats. The rest of the number is populated by sitar, flute, and strings, appending the basic keys, bass, and guitars. The set closes with a killer performance by Auldist on the streetwise soul that is "Window." For all its expansiveness and ambition, Medicine Man is expertly produced and sequenced; the Bamboos have not only retained their identity, they've created something so passionate, warm, and immediate. ~ Thom Jurek