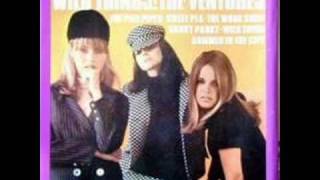 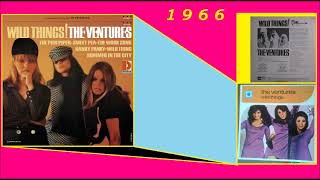 Personnel: Nokie Edwards, Bob Bogle (guitar, bass guitar); Don Wilson (guitar); Mel Taylor (drums).
Over the course of several '60s albums on the Liberty subsidiary, Dolton, the Ventures became the most popular instrumental combo in the U.S.; they would later go on to international fame in the '70s and '80s as pop icons in Japan and Europe. Staying consistent with other globally appealing theme albums like The Ventures' Beach Party and Super Psychedelics, the band opt for a mod, go-go spin on 1966's Wild Things! Along with high-profile covers like "Wild Thing," "Summer in the City," and "The Work Song," some respectable originals like "Wild Trip," and "Fuzzy and Wild" are also included. With the aid of their fuzztone- friendly Mosrite guitars, the group keep things sufficiently grainy and hard-edged throughout; the occasional Farfisa organ, Peter Lorre impersonation ("Wild Thing"), and Martin Denny exotica flourish help balance out the mix. Later released on a See For Miles' two-fer with the Guitar Freakout album, Wild Things! might not compare to classic early releases like Surfing and In Space, but it still is a good bet for die-hard Ventures fans. ~ Stephen Cook