A celebration of youth, friendship, and the everlasting magic of the movies.

213K ratings
Currently Out of Stock: We'll get more as soon as possible
Notify Me When Available
Add to Wishlist
Format:  Blu-ray  (2 Discs)
sku:  6E6HW
92% recommend us! 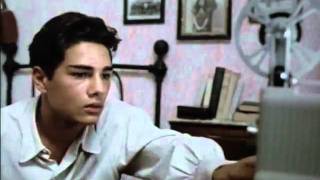 A nostalgic look at a young boy's coming-of-age in postwar Italy and his fascination with a small local cinema, CINEMA PARADISO from director Giuseppe Tornatore is a famed and beloved classic.

"Alfredo is dying." Those words jolt the successful filmmaker Salvatore (played as a child by Salvatore Cascio, as a teen by Marco Leonardi, and as an adult by Jacques Perrin), into contemplating his childhood and the hours he spent in the projection booth of his adored local movie theater, Cinema Paradiso. Alfredo (Philippe Noiret), owner of the moviehouse, befriended and encouraged young Salvatore, known as "Toto" as he grew up in his small Sicilian home town, ravaged by the horrors of the war. The cinema offered escape and fantasy to the townspeople, including Toto's mother, a grieving war widow. In one breathtaking scene a popular comedy is projected onto the walls of the town square and the entire town glows in the dreamy light of projected celluloid, washing away the harsh realities of poverty and grief. As Toto grows to manhood, his friendship with his mentor deepens. With the love and guidance of the aging man, Toto navigates the trials of first love and builds on his ever-growing passion for the cinema. Ultimately, it is Alfredo who convinces Toto to leave his village to pursue his dreams of becoming a director. But as Salvatore thinks back on his youthful romances and his innocent love of movies, he comes to realize that perhaps his success has come at a very high price. A beautifully filmed tribute to the power of movies that captivated an entire generation of filmgoers, CINEMA PARADISO is an unforgettable masterpiece.