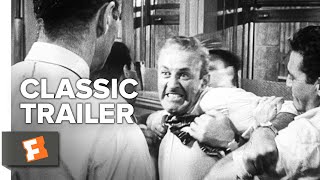 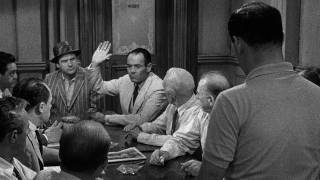 "Well, I'm not used to supposin'. I'm just a workin' man. My boss does all the supposin' but I'll try one. Supposin' you talk us all out of this and, uh, the kid really did knife his father'"
- Juror #6 (Edward Binns)

Sidney Lumet's directorial debut is a snapshot of the American judicial system in action. Twelve average New York males convene in a very small jury room on a very hot day in order to reach a verdict in a murder trial. Almost everyone wants to vote guilty and get on with their lives except for Juror No. 8 (Henry Fonda), a conscientious citizen who insists on establishing reasonable doubt. Arguments are made, cigarettes are smoked, murder weapons examined, diagrams drawn, and prejudices revealed. Firm opinions weaken and reverse; voices get raised, the clock ticks, and a ghetto kid's life hangs in the balance.

Lumet's direction and camerawork steadily builds pressure into the plot. Things start out casual, but wind up so close and tight you can count the pores on the actors' noses. Fonda is good in a role well-suited to his extra-large sense of human dignity but the stealth giant in this actors dozen is the ferocious Lee J. Cobb. Jack Klugman, E.G. Marshall, Martin Balsam, Ed Begley, and Jack Warden play some of the other jurors, and a better assemblage of grizzled method actors shouting at each other won't likely come again. 12 ANGRY MEN was originally written for television, it is a true classic of the anti-McCarthy message era, and is not to be missed.

18%off
Witness for the Prosecution
$16.40 Super Savings
Add to Cart

To Kill a Mockingbird (Blu-ray)
$18.20 Super Savings
Add to Cart