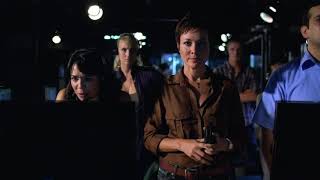 Cinemax's first scripted primetime drama series returns after a more than two-year hiatus, with a new cast of intrepid protagonists and nefarious villains facing off in a risky international game of cat and mouse. A high-octane thriller filled with an abundance of adrenalized action and heart-pounding suspense that are the franchise's trademarks, Season 5 of Strike Back introduces MAX viewers to four newly minted members of Section 20, the disbanded secret British anti-terrorist unit that has been resurrected in the wake of a deadly terrorist's escape. Faced with daunting odds in a variety of hostile settings, the new team – Samuel Wyatt (Daniel MacPherson), Gracie Novin (Alin Sumarwata), Thomas "Mac" McAllister (Warren Brown), and Natalie Reynolds (Roxanne McKee) – take full advantage of Section 20's state-of-the-art resources to prevent the elusive Omair Idrisi and his equally sinister British-born wife Jane Lowry from unleashing a stolen cache of weapons of mass destruction. Over the course of the season, viewers will hold on to their collective seats as the covert unit embarks on a lethal manhunt involving a vast global web of criminal and terrorist activity. As the team journeys across North Africa, the Middle East and Europe, they uncover a toxic conspiracy that threatens to destroy them and change the face of modern warfare forever.