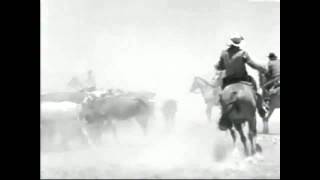 Get rollin', rollin', rollin' with Oscar-winner Clint Eastwood in "Rawhide" - the trail-blazing western series that jump-started his illustrious movie career! This 7-disc set contains all 22 episodes from the first season, plus a bonus episode from Season 2, to get you back in the saddle with everybody's favorite cowhand, Rowdy Yates; his tough-minded trail boss, Gil Favor (Eric Fleming); and a whole herd of legendary guest stars. With villains who will rob you blind and heroes who will steal your heart, the wild west has never been so much fun!

Before he became a fixture in the spaghetti Western genre, iconic actor Clint Eastwood shot to fame in the 1950s and '60s television series RAWHIDE. Considered one of the best TV Westerns of all time, the classic series followed the episodic adventures of a band of rovers hired to drive cattle through the lawless terrain of the 1870s Wild West while encountering both natural and manmade dangers like anthrax and cattle rustlers. Eastwood starred as rover Rowdy Yates, the straight-arrow assistant to a tough-as-nails trail boss, Gil Favor (Eric Fleming), who also presided over trail hands Mushy (James Murdock), Quince (Steve Raines), Nolan (Sheb Wooley) and Wishbone (Paul Brinegar). This collection includes all 22 episodes of the cult favorite's debut season, which included guest appearances by Leslie Nielsen, Martin Landau, Lon Chaney, Dick Van Patten, DeForest Kelley, and Jack Lord.