Introducing the plans for a new business venture. 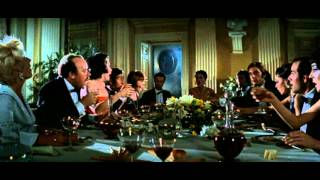 Forget about the straight and narrow. Clever con Charlie Croker (Michael Caine) intends to go straight to the bank. Fresh from the slammer, he begins work on a heist that will either set him up for life--or send him up forever. Croker and his unruly lot of thieves take on the mob, the police and the gridlcked traffic of Turin to rob a heavily armed shipment of gold bullion in The Italian Job. Entertainment legend Noel Coward (in his last film role) costars in this open-throttle caper as criminal mastermind Bridger. And Benny Hill, Raf Vallone and Rossano Brazzi add to the story's fun and suspense as it zips from plan to robbery to escape to an ending that's a cliffhanger in every sense of the word! Hold on tight!

Peter Collinson's 1969 caper film made an immediate impact with audiences craving a faster paced and higher octane film. A box-office hit that held audiences breathless, THE ITALIAN JOB would influence action movies for years to come with its thrilling car chases, explosive pyrotechnics, and smash-em-up sensibility.

Before being murdered by the Mafia, criminal genius Robert Beckerman (Rossano Brazzi in a cameo role) masterminds a plan to steal $4 million worth of gold bullion from an armored car in Turin, Italy. The ambitious heist is taken over by Beckerman's friend and smalltime crook Charlie Croker (Michael Caine), who organizes a motley group of thieves bankrolled by jailed kingpin Mr. Bridger (Noel Coward). To pull off the plan, the gang must tie up traffic in the center of the city to divert attention from the robbery, block police pursuit, and ultimately make off with their booty undetected. The caper leads to one of the most exciting car chases ever filmed, featuring a bus, a couple of Jaguars, and a trio of brightly colored Mini Coopers careening through the streets, buildings, and highways of northern Italy and winding up in a breathtaking final cliffhanger that is simply unforgettable.