A trio of terrific entertainers teams up for a triple play of family fun as Secret Squirrel, Squiddly Diddly and Winsome Witch tackle espionage, show biz and magic. 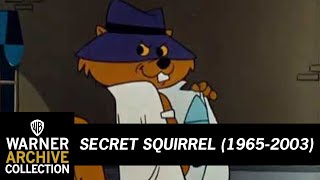 It's Secret Squirrel! This truly super spy is ready to tackle the top secret miscreants of the world, regardless of locale. Thanks to his dazzling array of high-tech devices and his invaluable underground assistant, the fez-wearing Morocco Mole, Secret uncovers the villainy of Yellow Pinkie, Wiley Wolf, Hy Spy and more, whether they be disguised as fountain pens or potted plants. Sharing the bill with our super-heroic spy team is Winsome Witch, a demonically delightful lady with a funny bag of tricks, streaking on her broom into the night, leaving spells of laughter in her wake. And let's not forget our wannabe star, the one and only Squiddly Diddly. Squiddly's swum up from the ocean depths in search of his big showbiz break, but while he awaits discovery, the wriggly thespian must make do as an aquarium's janitor.

Captain Caveman and the Teen Angels - Complete Series...
$24 on Sale
Add to Cart

Frankenstein Jr. and the Impossibles - Complete Series... (DVD-R)
$24 on Sale
Add to Cart