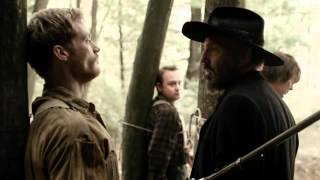 This miniseries from cable's History Channel travels back to the second half of the 19th century for an epic-length, dramatic evocation of one of history's most famous and vitriolic feuds. A conflict that first erupted in 1863 and spanned a whopping 28 years, the Hatfield-McCoy War began simply, with two Confederate soldiers, Randall McCoy (here played by Bill Paxton) and 'Devil' Anse Hatfield (here played by Kevin Costner) returning home after many months of battle in the U.S. Civil War. Initially, the future appears bright to both men, but a misunderstanding soon erupts that leads straight to a tragic murder, and an illicit love affair further complicates the situation. In time, minor clashes and disagreements blow up into a local civil war, as neighbors and friends take sides. Kevin Reynolds (WATERWORLD, FANDANGO) directs.