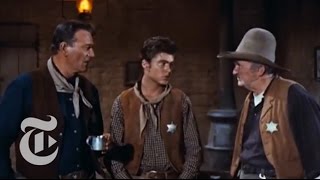 No-nonsense Texas border sheriff John T. Chance (John Wayne) fights off ruthless mercenary gunmen in order to keep a murderer in custody. A ragtag band of volunteers, consisting of a singing kid, a toothless old man, a recovering alcoholic, and a spunky woman, assist. Contains an interesting sing-along interlude among the group, and yes, the Duke participates.

John Wayne stars as the sheriff of a small western town who arrests a murderer and then must contend with the aggressive efforts of the killer's brother to free him before the state marshall arrives. Surrounding the town, the villains make repeated runs at the tiny jailhouse where their comrade is incarcerated. The sheriff is left to defend the territory almost single-handedly -- his only aid being a rag-tag crew of misfits, including a drunk, an old cripple, a saloon woman, and a singing teenager. The plot's tensions build to one of the most explosive finales in cinema history.