Meet The Original Force Of Nature 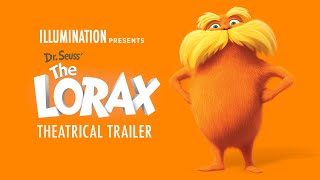 Hollywood Reporter - 02/29/2012
"[T]he most satisfyingly Seussian big-screen effort to date....Armed with a splendid voice cast and a gorgeously rendered 3D-CG landscape..."
Entertainment Weekly - 03/09/2012
"It's got a winningly whimsical Seussian spirit....Vibrant and touching." -- Grade: B+
Box Office - 03/01/2012
4 stars out of 5 -- "[T]his is purely warm, wonderful, wise and hilarious family entertainment that is fantastic movie fun for everyone..."
Sight and Sound - 08/01/2012
"There's a host of funny animals, and the human characters often break into hilariously over-the-top songs and dances, and use the Seussian design of their world -- all rollercoaster ramps and curves -- to dynamic effect."

Dr. Seuss' classic, environmentally themed children's book comes to the big screen in this tale of a young boy who encounters a cantankerous forest creature after venturing outside of his artificial city in search of a tree. Ted (voice of Zac Efron) lives in a town where nothing is quite as it appears; everything is plastic, including the plants. Hopelessly smitten by the beautiful Audrey (voice of Taylor Swift), who dreams of one day seeing a real tree, Ted boldly leaves the city determined to find the flora and grant her wish. Along the way, the young adventurer crosses paths with the Lorax (voice of Danny DeVIto), a diminutive, mustached defender of nature who doesn't take kindly to human intruders. The better Ted gets to know the Lorax, however, the more he learns that his newfound friend has good reason for being a bit surly. Also featuring the voices of Betty White, Ed Helms, and Rob Riggle.

How the Grinch Stole Christmas
$18.10 Super Savings
Add to Cart

Horton Hears a Who
$8.40 Super Savings
Add to Cart