They needed a second chance to finish first. 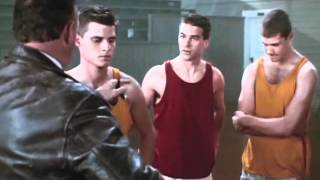 Nominated for two Academy Awards, this triumphant tale of a high school basketball teams' long-shot attempt to ascend to the State Championship is filled with edge-of-your-seat suspense and breathless excitement! Featuring "fast-break cinematography that catches the pace of the game" (Washington Post) and intense, heart-rending performances from Gene Hackman, Barbara Hershey and Dennis Hopper, Hoosiers is rated one of ESPN's and Sports Illustrated's top-ten sports movies of all time.

Hackman is Norman Dale, a basketball coach whose checkered past has led him to a last-chance position with a last-chance team. Made to feel unwelcome by squad members, an icy fellow teacher (Hershey) and townspeople who nearly have him fired, Dale perseveres with a gritty demeanor and an unwavering passion for the game. But winning over the team is only half the battle in a world where small-town teams can end up playing big-time rivals ... and a downtrodden outsider can rouse the pride of an entire county. As "a well-made slice of Americana" (Leonard Maltin), Hoosiers "scores big" (Washington Post)!

Based on the incredible true story of how a small-town high school's basketball team became Indiana State Champs in 1954. This film follows the controversial outsider who came to town to teach high school history and coach basketball and who was not afraid to make big waves in a small pond. Academy Award Nominations: Best Supporting Actor--Dennis Hopper, Best Original Score.

Basketball is king in the small town of Hickory, Indiana, so local residents are outraged when the new coach makes a few unorthodox choices concerning the high school team. But the coach's mixture of patience and toughness eventually wins over the town, and succeeds in delivering the athletes to the state championship.