There is no other movie in the world like "Maniac," an early exploitation horror film based on Edgar Allen Poe's "The Black Cat." A cult classic unseen for years portrays the consequences of untreated insanity. 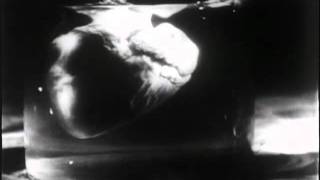 A milestone in exploitation filmmaking, Maniac is also one of the most shocking and fascinating movies made in the thirties, pushing the boundaries of acceptable film production to its limits. Created by the husband and wife team responsible for films such as Marihuana, Weed With Roots In Hell and How To Undress In Front Of Your Husband, Maniac was originally shown at burlesque theaters and roadhouses rather than at regular movie theaters. A burlesque house was an appropriate venue for Maniac as the movie includes shots of topless women - a true shocker for 1934! Based partly on Edgar Allan Poe's The Black Cat, Maniac also cleverly superimposes clips from a 1922 movie called Haxan to suggest the insanity of characters. The wild plot concerns a mad doctor (Horace B. Carpenter), who blackmails a former vaudeville impersonator (Bill Woods) into helping him obtain the corpses he needs to perform Frankenstein-like experiments. When the doctor is accidentally killed, the impersonator "becomes" the doctor and even attempts to bring him back from the dead. Maniac revels in it's gleeful exhibition of "bad taste." Contains Nudity.

From the husband and wife team that gave you NARCOTIC (1933), comes this film loosely based on Edgar Allan Poe's "The Black Cat." A madman kills a scientist and conducts experiments of his own in his rat-infested basement. Regarded by some as the worst film ever made, the film actually straddles the line between experimental and exploitation. In an attempt to mimic insanity, disturbing imagery- still raw by today's standards- fills the screen. Along the way, there are touches of necrophilia, a peek into a (real!) farm where cats are turned into fur coats, and double exposures of demons, and some nudity. Too dark to be campy, too strange to be taken seriously, this one is an original.

25%off
Haxan: Witchcraft Through the Ages (Silent)
$5.95 ENDS TONIGHT
Add to Cart

Customer Rating:
Based on 3046 ratings.


Everything you've heard about this film is false. It's much worse than what you've heard or read. It tries fo be titalating, scarey, pseudo-scientific, extraordinary, educational, raunchy, and much more. And in each wasy it is done so vadly that the film HAS to be watched by those interested in film. It is perfect...perfectly bad!


I am the one who wrote the IMDB review that talked about the infamous eye gouging scene. Believe me it was carefully researched; I watched that scene frame by frame and it is deffinitely a prop head being shaken. The part about the one-eyed cat from the pet shop was corroborated by Dwain Esper's daughter. More disturbing are the scenes with the neighbour (identified in the script as "The Goon") who raises cats for their pelts and feeds them rat carcasses to get them good and plump. Just who would wear a garment made of cat skin anyway? No one I would want to know!
Horace Carpenter (Dr. Mierschultz) had been one of Cecil B. DeMille's regular stock players in silent movie days. He even directed a few silent westerns which can still be found! A point of controversy is the actress billed as Phyllis Diller. Some people claim this is an early role for the famous comedienne. Well it isn't! Phyllis the comedienne was born in 1917 which would make her just a teenager when this was made so it could not possibly be her.
If you survive this film watching the rest of the Esper collection should be easy. His anti-drug movies inlcude NARCOTIC (1932) based on the life of one of his in-laws and MARIJUANA THE WEED WITH ROOTS IN HELL. Harder to find but equally worthwhile is his 1945 movie CONFORM OR DIE which is about Nazi Germany. It was also released under the more exploitable title THE LOVE LIFE OF ADOLF HITLER.
Whether you love them or hate them you will never forget a Dwain Esper film once you've seen it! Have fun everyone.


This movie is the long lost answer to the question "how great is great?". Dwain Esper should be thanked every day by serious film buffs for his tremendous body of work, none greater than this masterpiece. The acting is worthy of anything ever done by Tor Johnson, and the dialogue and inspired use of stock footage nearly rivals that of the immortal Edward D. Wood, Jr. A true classic, in every sense of the word. Pass the cat eyes, please.

HOPE THAT WHAT I READ ON IMDB WAS CORRECT! Movie Lover: henri donadille from clamart, Hauts-de-Seine FR -- September, 21, 2004


Watched this film yestarday. Thought that it was campy and not really bad until the popping out of the cat's eyeball! It sent me into a rage. I had heard that back then there were really no fines given to those who performed (or allowed) cruelty to animals on screen. I mean popping out a poor cats eyeball right on screen just for a movie?! Luckily today I looked up the film on IMDB's Website and one reviewer wrote that there was no harm done to the cat in real life and another reviewer wrote that Espher(sp?) had gotten the cat from an animal shelter and that cat already had only one eyeball. Special effects made it look like a real eyeball was being taken from the cats eye socket. How unnerving, anyhow?! Seeing partial nudity was a real surprise for the era in which the film was made. Never had seen that in an old film before.


Poorly directed, written, acted and conceived. More a bad taste relic of the pre-Code '30's than anything to make your skin crawl...well, except for maybe the eyeball scene. Laughable combination of acting and dialogue between the Doctor and his assistant reminiscent of bad community theatre! With all that said, the film was a hoot! For less than 6 bucks, how can you go wrong?