Gold for the Caesars centers on a slaved named Lacer (Hunter) and his beloved, the mistress of Maximus, the ruthless Roman proconsul of Spain. 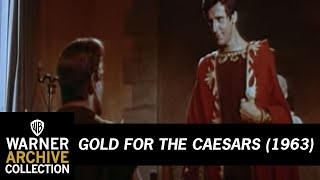 Among the sword-and-sandal epics produced in Italy following the 1959 U.S. box-office success of Hercules, Gold for the Caesars follows the popular formula: an American star (Jeffrey Hunter), voluptuous temptresses, slaves, tyranny and exciting displays of muscle-ripping combat. Gold for the Caesars centers on a slaved named Lacer (Hunter) and his beloved, the mistress of Maximus, the ruthless Roman proconsul of Spain. Charged with managing a vast gold-mining operation in the middle of a bloody Celtic uprising, Lacer fights men, nature and his conflicted heart.

Adventure | Slavery | Love
This product is made-on-demand by the manufacturer using DVD-R recordable media. Almost all DVD players can play DVD-Rs (except for some older models made before 2000) - please consult your owner's manual for formats compatible with your player. These DVD-Rs may not play on all computers or DVD player/recorders. To address this, the manufacturer recommends viewing this product on a DVD player that does not have recording capability.

Planet of the Apes
$8.40 Super Savings
Add to Cart

Lure of the Wilderness
$19
Add to Cart

Customer Rating:
Based on 134 ratings.


Review of Gold for the Caesars

Pro-Consul and Governor of Spain Maximus has two obsessions. Emperor Domitian is dying and Maximus desperately wishes to succeed Domitian as emperor. To get elected to such a high position, one needs a considerable amount of money. (Some things don’t change.) He, therefore, disobeys his orders to drive the Celts from their lands and instead makes a deal with them: he won’t invade their territory if they allow him to send a mining party into their lands to reopen an old Phoenician gold mine from which he hopes to extract the necessary riches.
Maximus’ second obsession is his slave and mistress Penelope. Recently she has been far too affectionate with another slave, Lacer. Maximus would kill Lacer but, unfortunately from Maximus’ viewpoint, Lacer is Maximus’ engineer and is needed to begin mining operations. Maximus sends slaves and a small military detachment under the command of Centurion Rufus into Celt controlled territory as agreed upon. Rufus has orders to let Lacer start mining operations and then kill him.
This is a sword and sandal movie, a genre popular in the late ‘50s and early ‘60s. I would agree with reviewers who write that the acting is considerably above average for this ilk of motion picture and is worth a look.