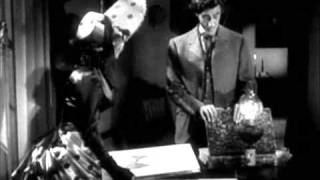 John Carradine delivers the strongest performance of his career in this taut, suspenseful version of the Bluebeard legend. Carradine is the nefarious Gaston, an artist and puppeteer in 19th century Paris who strangles lovely young models when they fail to meet his exacting standards of perfection. Gaston's new model, Lucille, learns of his shocking secret and bravely vows to bring him to justice. This beautifully executed thriller is directed by Edgar G. Ulmer, who sustains a steady level of suspense throughout the film and inspires masterful performances from the entire cast.

In 19th century Paris, someone is murdering young women and dumping their bodies into the Seine. That someone is Gaston (John Carradine), a handsome, brooding painter and puppeteer who strangles his models with a black tie. Jean Parker plays Lucille, a dressmaker who finds herself drawn to Gaston's tortured soul after she attends his puppet opera of FAUST. Gaston's shady art dealer (Ludwig Stossel) knows he kills women, but conceals evidence because his paintings sell. When Gaston's latest victim is recognized in one of his works at an exhibit, inspector LeFevre (George Pembroke) takes steps to trap the mysterious painter. This is an amazing, low-budget work by acclaimed cult director Edgar G. Ulmer. Filled with repertoire costumes and painted backgrounds, the stagey feel nonetheless adds to the claustrophobic air of melancholy that hangs over the film, as if the cast were all puppets themselves in some cheap production. It's not a particularly scary film, but it offers plenty of excitement and has moments of beauty, and Carradine is effective as the quietly tortured, magnetic artist.

Psychos | Slasher | True Story | Killer | Murder | Film Noir
This product is made-on-demand by the manufacturer using DVD-R recordable media. Almost all DVD players can play DVD-Rs (except for some older models made before 2000) - please consult your owner's manual for formats compatible with your player. These DVD-Rs may not play on all computers or DVD player/recorders. To address this, the manufacturer recommends viewing this product on a DVD player that does not have recording capability.

25%off
The Villain Still Pursued Her
$5.95 BLACK FRIDAY
Add to Cart

Customer Rating:
Based on 2465 ratings.


I beg to differ with others who have reviewed this film. It is daerk but that's probably the quality of the print that the DVD was copied from. John Carradine's acting is so overly dramatic that's it's beyond belief. And the music...every scene has a musical background that is much too loud and much too distracting. I expected much more and got much less.


The best of PRC's horror films. Nice atmosphere as Carradine quietly stalks his victims in gaslit Paris. Jean Parker is quite good as the girl who's next on his list. Nice marionette scenes where puppets perform selections from Gounod's opera 'Faust'. Intriguing and suspesful.


We all know that director Ulmer often produced interesting films on a shoestring budget, and that Bluebeard is cited as a prime example. I found the story pretty interesting, the acting quite good, Carradine excellent and the young ladies, with Jean Parker chief among them, heartbreakingly beautiful to behold. There's music upon music: Light opera during marrionette performances, plus the entire film has pleasant background music credited to "Erdody". Transfer appears to have come from a 16mm TV print with cue marks and splices, but the image is clear and the sound is acceptable. However, its a pleasure to be able to watch an old movie about which I am curious or interested and pay about the same as a current movie theater ticket. Thanks and long live Alpha video!